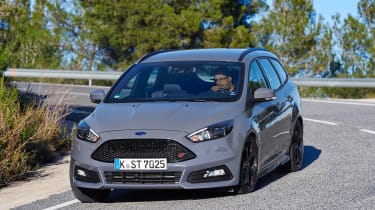 It seems strange that hot wagons aren’t more popular, because this 2015 Ford Focus ST Estate delivers all the handling, speed and excitement of the hatch, with genuine family friendly practicality. Despite power output staying constant, the EcoBoost engine is a peach, even if the ride is a bit nibbly. If you prioritise fuel economy then the diesel is a better idea, but if it’s thrills you’re after, the petrol car wins hands down.

Hot estates are making a serious comeback of late. Forget the array of V8-powered Mercedes AMG wagons currently available, we’re talking about mainstream family cars with a sting in their tail. The Skoda Octavia vRS has been around for a couple of years now, but you’ll soon be able to buy a SEAT Leon Cupra ST, while a new Volkswagen Golf GTD Estate has been confirmed for the Geneva Motor Show in March.

Ford can claim some credit for the renewed interest – it’s been offering a Focus ST Estate since 2012, and thanks to a recent series of mechanical and cosmetic updates, it should be better to drive and as practical as ever. It threw in a curveball for the facelift, too, because you can now order your fast Focus Estate with the choice of a 247bhp 2.0-litre EcoBoost petrol engine or a 182bhp 2.0 TDCi diesel. We drove the diesel ST hatch last month, so it’s the petrol wagon we’re focusing on here. 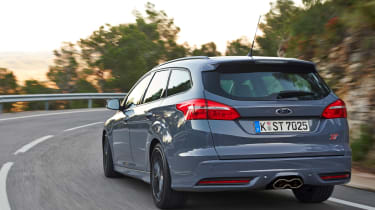 From a purely practical point of view, the Focus Estate could well be all the car you ever need. Open the large tailgate and there’s 476 litres with the rear seats up, or a whopping 1,502 litres with them down, forming a perfectly flat load space. Compare that to 316 litres and 1,101 litres respectively for the hatchback and the benefits are easy to see.

OK, so there’s a slight penalty in terms of price and performance – the Estate costs £1,100 more than the equivalent hatchback and takes 0.2 seconds longer to cover 0-62mph.

But remarkably, claimed fuel economy and CO2 emissions are identical at 41.5mpg and 159g/km respectively – an improvement of six per cent over the pre-facelift model thanks to the addition of stop-start. On public roads, the performance gap is impossible to spot. The Estate thunders down the road with the same force as the hatchback, and thanks to its rush of turbocharged acceleration feels even quicker than the numbers suggest. 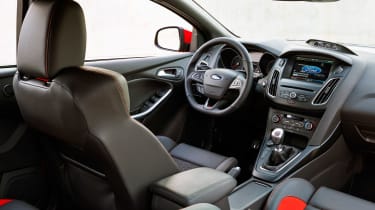 The best part about its direct injection EcoBoost engine, though, is its flexibility. A generous 345Nm of torque available from low-down in the rev range means it’s just as easy to select a higher gear and feather the throttle to make smooth and serene progress. To uncork the full performance potential, you simply let it rev and enjoy the rasping exhaust note until it’s time to change up.

Things don’t fall to bits in corners, either. In fact, despite the extra weight over the rear axle, it handles just like the hatch, which is great news for the driver – if not for the dog in the boot. Changes to the chassis and hardware include new front springs and slightly stiffer dampers all-round. As a result, body roll is minimal, but while the suspension never crashes over bumps, it does feel busy over less-than-perfect surfaces.

There’s a quicker ratio for the variable electromechanical steering, too, which means the Estate’s nose darts immediately to where you point it – almost too quickly at first – but you soon get used to steering with your wrists, rather than taking armfuls of lock. 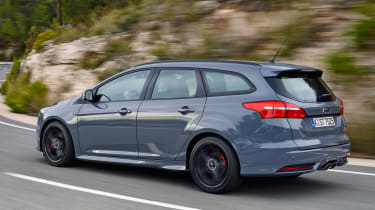 Up the speed and the ST stays well within its comfort zone – it’s a car that actually gets better the faster you drive it, leaning on the outside tyres and testing the levels of grip. But caution is advised: carry too much speed into a corner or jump on the throttle too early and the ST’s spiky power delivery is quick to spin up the front tyres and send you understeering across the road.

The question you now have to ask is whether you want this full-fat petrol-powered ST, or its tamer diesel sister car. If you’re already a hot hatch fan, then only the snappy petrol version will quench your thirst for speed, but the diesel’s superior fuel economy seems to go hand in hand with the Estate’s practical layout. What’s clear is that the Focus ST is one of the most competent and rounded hot hatches out there, and now there’s a version for everyone.