Petrol engines are efficient enough to recommend them over diesel, unless you’re focused on sub-100g/km emissions

The Ford Focus boasts a range of strong engines that each balance performance and economy well. Ford’s ubiquitous 1.0-litre EcoBoost petrol engine comes in two power outputs, as does the 1.5-litre EcoBlue diesel. All come with six-speed manual gearboxes as standard and this is invariably the best option for those wanting to maximise economy and minimise CO2 emissions.

Emissions are respectable across the board, although the least polluting model is the more powerful 125PS 1.0 EcoBoost with a six-speed manual. Its 97g/km of CO2 in Zetec trim just pips the lower-powered EcoBoost option by 1g/km. By comparison the Volkswagen Golf 1.0 TSI in S trim and with a six-speed manual emits 110g/km despite trailing on power.

Fuel economy is also respectable. Ford quotes figures of 52.3-53.3mpg for the 1.0 Ecoboost 100PS, from the WLTP cycle, while figures for the 125PS are slightly less at 47.9-51.4mpg. Adding an automatic gearbox to the equation sees a significant dip, with a return of 44.1mpg. 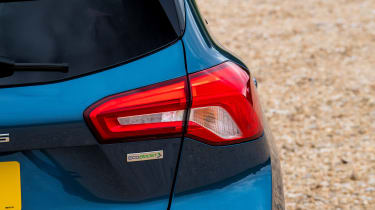 Diesels are still the best choice if you cover big distances and want to minimise fuel expenditure. The entry-level EcoBlue 95PS 1.5-litre unit with a manual gearbox emits just 92g/km of CO2 and returns 61.4 to 62.8mpg on the low and high WLTP cycles, while there's now no option of an automatic transmission.

Any Focus Estate model will trail its five-door hatch slightly on emissions and fuel economy, but this model remains competitive with its rivals on this front.

The most basic Ford Focus models should be incredibly cheap to insure. Zetec models start at group 11, while ST-Line comes in at group 15. The most expensive to insure is the ST, which sits much higher in group 34 in its most powerful petrol version; opt for the diesel and it’s group 23. All-in-all, that puts the Focus on par with the Golf, which starts at group 7 and rises to 19 for the highest-spec sub-GTD/GTI models.

The Mk4 Focus will hold its value to a similar level to the Vauxhall Astra – but the ever-steady VW Golf is still a few percent ahead of its rivals after three years of motoring. The Focus retain between 32 and 37 per cent of its value after three years or 36,000 miles, which is slightly shy of the evergreen Golf (which has values ranging from 38-47 per cent).