Ford has played things a bit safe on the Focus’ styling; it’s clearly an evolution of the old car’s, but it also incorporates some styling cues that we know from its little brother, the Fiesta – especially around the front end. The view along the sides is dominated by the longer wheelbase – the gap between the front and rear axles – which is the longest it’s ever been on a Focus.

Inside, the Focus’s dashboard is simple and relatively uncluttered by switches – although it’s good to see that the heating and ventilation controls are still present as physical dials and buttons, instead of being hidden in the depths of some menu on the infotainment system.

Speaking of infotainment, the screen is mounted in a prominent position, right at the top of the centre of the facia. Its ‘floating tablet’ style may not be to everyone’s taste but the location means that you don’t have to divert your eyes too far from the road ahead to see key information or switch channels on the radio. 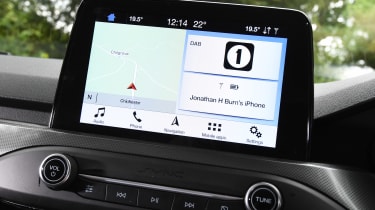 The interior quality is good enough to rival the best in class – without delivering a knockout blow on the VW Golf, perhaps. There are soft-touch padded materials up high, mixed with metallic finishes depending on which trim level you go for, and while there are harder plastics (notably on the centre console between the front seats), they’re generally in areas that you’re not likely to touch all that often anyway. It’s good to see padded door liners and flock-lined storage areas, too; they give the cabin a bit more of an air of luxury and help to cut down vibrations and rattles.

Those after a bit more luxury should look to the Vignale versions. Don't expect miracles, however, as even the poshest models still come bathed in black plastic and slightly cheaper materials on the lower reaches of the dashboard. Save a bit of contrast stitching and some plush leather seats, the Vignale cars aren't that different to the Titanium or ST-Line versions that sit below them.

Previously, the now-discontinued Style edition of the Focus made do with a DAB radio with a small 4.2-inch colour screen. Following a range tweak in late 2019, however, all Focus models get the larger eight-inch system.

Ford’s SYNC 3 system is snappy and quick to respond to inputs, while it's blessed with a reasonably simple interface with big buttons that are easy to stab with a finger when you’re on the move.

Crucially, the system also features Android Auto and Apple CarPlay – so even if your spec of Focus doesn’t have navigation, you can hook up your phone’s system via the USB port at the bottom of the centre console and get better live traffic updates than Ford’s offering anyway, plus your own music streaming services.