New platform brings some risk but the engine line-up features some proven motors. Warranty is slightly above average

The Focus is built on an all-new C2 platform, although we’re led to believe it shares knowledge and some technology with the underpinnings that have proven such a hit under the Fiesta in recent years. Even so, the new architecture does bring some risks on reliability – but at least the majority of the engines in the line-up are reasonably well-proven EcoBoost petrols. The EcoBlue diesels are fresh, though, so the jury’s out on their dependability.

Although the Mk4 Focus is all new, it’s worth noting that its immediate predecessor did finish in the top half of our Driver Power ‘Best Cars to Own’ poll.

Ford didn’t exactly cover itself in glory in our most recent Driver Power Car Manufacturer poll, though; 23rd position put it firmly in the lower half of the table, and it was behind some of the brands who build the Focus’s key rivals – VW, SEAT and Kia. 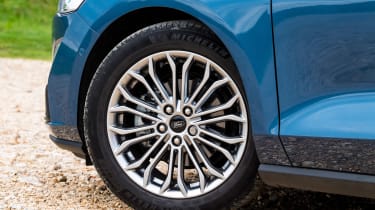 The new Focus has been tested by Euro NCAP’s crash-test team, and scored a full five stars out of five. It achieved 85 per cent for adult occupation protection and 87 per cent for child occupant protection. You’ll be able to order Co-Pilot360, which brings adaptive cruise control with stop & go, traffic sign recognition and lane centring. Other kit on offer includes evasive steering assist, blind spot monitoring with cross traffic alert, inflatable seatbelts and pre-collision assist with pedestrian and cyclist detection.

The Focus comes with Ford’s standard warranty, which is over an industry standard of three years but does stretch to 60,000 miles during that period, which is on the generous side. Ford also offers the chance to extend cover to four years/80,000 miles and five years/100,000 miles.

Ford hasn’t announced full details on servicing prices and plans for the Focus, but we’d expect the model to slot into the line-up somewhere between the Fiesta and Mondeo. That should mean a price of around £550 for three years of cover, including two services.