Plenty of space in the cabin for a family with fast-growing children - and the boot should be just about big enough to cope with their luggage too.

One of the Mk3 Focus’s biggest problems was a shortage of interior space, so Ford went back to the drawing board for the Mk4 Focus and extended the wheelbase (the gap between the front and rear axles) by more than five centimetres.

All of that extension has been handed over to the cabin occupants - particularly those in the rear seats. And the result is accommodation that is perfectly comfortable for four six-footers, even on a long journey. There’s even room for a third occupant in the middle of the rear seats - and with no big transmission tunnel in the floor, they should have somewhere to put their feet, too.

Up front there’s good shoulder and headroom, and small touches there have improved the overall feeling of space; there’s a switch-operated electric parking brake across the range now, instead of a bulky handbrake lever. However, if you're a taller driver, you may find getting in and out a little bit trickier. That's because if you have the seat set back, you might catch yourself on a piece of plastic trim that sticks out from the door frame. 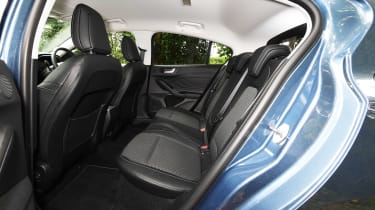 The boot isn’t the largest in the class, but it’s more than respectable - and only a few litres off the capacity of a VW Golf when the rear seats are in place. Lower them and the Focus actually trumps some of its main rivals on out-and-out load-lugging space.

The Ford Focus is 4,378mm long, 1,979mm wide (including mirrors), and 1,471mm tall. Those figures make it a full 12cm longer than a VW Golf, although the Ford is only a few millimetres longer than another of its main rivals, the Vauxhall Astra.

It’s wider than both of those competitors, too, and you may want to take advantage of Ford’s optional door protectors. They extend around the edge of the door as you open it, protecting the metal from scrapes against walls and plaster.

The Mk4 Focus is definitely the most practical version of the car to date; there’s room in the cabin for four six-footers to travel a long distance in comfort, and a fifth person could squeeze into the middle seat in the rear for a shorter trip. There are ISOfix points for child seats in both of the outer rear seats.

The Focus is now one of the longest cars in the class, but Ford has clearly used that extra length to prioritise cabin space over boot capacity, because while the load bay of the car is up there with those of its rivals, it’s not exactly cavernous.

At 375 litres with the rear seats in place, the Focus gives away five litres to the capacity of the Golf. But fold the back row down and the positions are reversed; the Ford’s 1,354 comfortably exceeds the VW’s 1,270 litres. But of course, neither of these cars can get anywhere near the load-lugging ability of the Skoda Octavia, the undisputed family-car king of boot capacity. 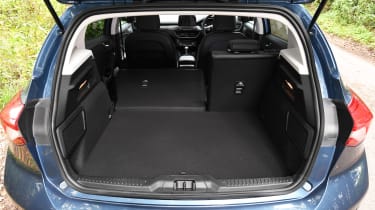 There are a few side hooks in the Focus’s boot but it’s a little disappointing that Ford hasn’t seen fit to offer some more tricks in the boot floor itself – such as sticky ‘dividers’ that could stop your shopping from rolling around.