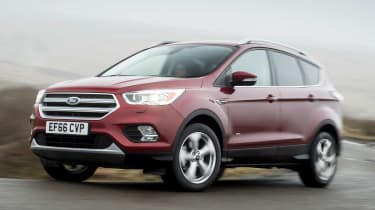 The Ford Kuga Titanium has a competitive price tag with a host of clever tech and a big boot. The styling is a bit bland for some and, crucially, it isn't as sharp to drive as the previous generation, but the Kuga is still a great all-rounder to take on the big hitters in the compact SUV class.

There was a time when the Ford Kuga Titanium represented the most upmarket version of the Kuga on sale. Today, the Vignale brand turns things up a notch higher, but Titanium trim is still a popular choice, as it offers more kit and luxury over the Zetec models below. And on the Kuga, that means Ford's popular crossover gets some desirable kit to attract buyers while still offering decent value for money.

The current Kuga Titanium arrived as one of the launch trims on the car in 2012, while a facelift was introduced in 2016. Titanium sits between Zetec and ST-Line in the Kuga range, while there are two variants, Titanium and Titanium X. Standard kit on both cars include auto lights and wipers and rear parking sensors on the outside, while kit on board includes Ford's Sync3 touchscreen sat-nav with voice control, a six-speaker stereo, keyless entry, dual-zone climate control, LED lighting and part-leather seats. On top of that, Titanium X cars add 18-inch wheels (they're 17-inch on Titanium cars), xenon headlights and LED tail-lights, panoramic glass, hands-free tailgate opening and heated leather seats with electric adjustment for the driver's seat.

Every Kuga engine bar the least powerful 120PS 1.5 EcoBoost petrol is offered in Titanium and Titanium X guises. Depending on which engine you choose, you can have either front or four-wheel drive and manual or auto gearboxes. Ford's latest 148bhp 1.5 EcoBoost turbo petrol kicks off the range with a six-speed manual box and front-wheel drive, while choosing the 180bhp EcoBoost 182PS version also adds four-wheel drive and Ford's Powershift six-speed auto.

The rest of the Kuga Titanium engine range is diesel, starting with the 1.5 TDCi 120PS coming with 118bhp, front-wheel drive and an optional six-speed Powershift auto available to replace the standard six-speed manual. There's also a 2.0 TDCi in 150PS and 180PS forms with 148bhp and 178bhp respectively. The 150PS unit is solely front-wheel drive and manual, while the 180PS version is AWD as standard and comes with either a six-speed manual or Powershift auto.

If running costs are a priority, then go for the front-wheel-drive Kuga with the 148bhp 2.0 TDCi diesel, as this is reasonable to run yet still has decent enough performance for towing and carrying heavy loads. It returns 60.1mpg and emits 122g/km of CO2, yet even the 178bhp version with four-wheel drive will return a respectable 54.3mpg and emits 135g/km of CO2.

Prices for the Kuga Titanium start at just over £26,000 and rise to just under £32,000, while Titanium X adds a premium of around £2,800 over Titanium, although Ford dealers will be open to negotiation on prices for both of these models.

And for your money you get a decently practical five-seat family SUV. The rear seats offer good room, and they also recline to give extra comfort. The boot has 442 litres of space with the seats in position, and folded the Ford Kuga Titanium’s load increases to 1,928 litres. These figures drop slightly if you choose to add the optional space saver spare wheel, but it’s still pretty big. There's a low loading lip, too, so getting items in and out is easy. 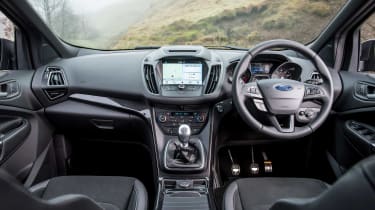 Behind the wheel, you’ll find the Ford Kuga Titanium less focused than some rivals like the Mazda CX-5, because the suspension has been tweaked for comfort rather than cornering ability. The fully electric power steering system fitted to the Kuga saves on running costs, but it has sacrificed feedback and feels very light.

Overall, the Kuga Titanium is a decent SUV, but not one to get excited about. Rivals in this tough sector include the excellent Peugeot 3008, SEAT Ateca, Skoda Karoq, Renault Kadjar, Nissan Qashqai, Honda HR-V/CR-V and Toyota C-HR/RAV4, among many others.