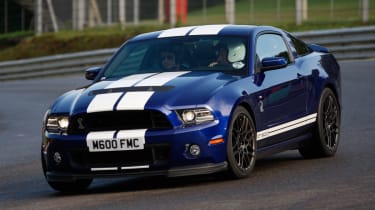 The GT500 has ferocious straight-line performance, while the noise from the V8 will put a smile on anyone’s face. This car even corners well. But if you want one you’ll have to import it – and at nearly £70,000 by the time you’ve got it to the UK, it starts to look a rather expensive proposition.

Big American muscle cars have never really taken off in the UK – if not because of their sheer power and flawed handling, then because of their enormous dimensions and high running costs. But there’s no denying the pure thrill of speed and noise they bring, and the Ford Mustang is the most iconic car of its kind.

Fortunately, the GT500 doesn’t seem to have the same drawbacks as most large US performance cars. Fling it into a tight corner and it responds well – it’s not as sharp as a sports car, but is still surprisingly agile.

While the acceleration is predictably brutal, stopping the car takes a little more effort. The brakes don’t quite feel as strong as you’d like given the power on tap. This can’t be purely down to weight, either – at 1,747kg, the GT500 is around 100kg lighter than a Vauxhall VXR8.

More impressive than the performance is the noise this car makes. Start it up and there’s a loud snarl from the exhausts. Put your foot down and the V8 burble breaks out into a full-on bellow.

As with most things American, the Mustang isn’t very subtle; the styling is brash, the long bonnet comes with an aggressive-looking air intake, while a short rear end completes the classic muscle car proportions. It’s all finished off with four exhaust pipes, which might help explain the volume.

Inside are some soft-touch materials and carbon fibre trim. However, the finish isn’t quite up to the standard you’d expect from a range-topping model. There’s another problem with the GT500; you can’t buy it in the UK. On the other side of the Atlantic, it costs $54,995 – that’s around £34,400 with the current exchange rate – but once you’ve imported the car it will be nearer the £70,000 mark.

So fans of the Mustang may prefer to wait for the next-generation model, which Ford has already confirmed will be coming here, in right-hand-drive form, in 2014.