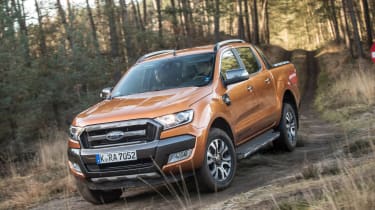 The Ford Ranger Wildtrak fulfils a need for buyers that want the best-equipped pick-up truck you can buy, while its five-cylinder diesel offers something unique in the class. However it's thirsty and doesn't really offer much more pulling power than the best four-cylinder diesel models on sale. Wildtrak trim is plush for a pick-up, but again the Ranger has been overtaken in this regard, too. Still, it's the most rugged and purposeful 4x4 in the Ford line-up, and offers something different for buyers looking at an alternative to an SUV.

A pick-up truck with no compromises: that was the original promise made by the Ford Ranger. It’s designed to be tough but comfortable, rugged but stylish. And rugged the Ranger Wildtrak definitely is – this is the top of the range version on sale, and it gets some unique styling touches when compared to the rest of the Ranger range.

For starters, Ford sells it only in a double cab body style - there are single and super cab Ranger variants on sale elsewhere in the line-up - while 18-inch alloy wheels are unique to the Wildtrak, too. The chrome grille and bumpers front and rear found on the Ranger Limited are replaced by a painted titanium grey finish, while the front bumper and wing mirrors also get a grey finish instead of chrome. At the back, there's a standard-fit roll bar behind the cab, called a sports bar here, that's also finished in titanium grey, while the Wildtrak has an exclusive colour called Pride Orange available for extra cost. 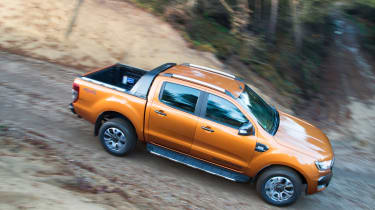 Roof rails are fitted as standard to the Wildtrak, and there's more kit on board, too. There's exclusive leather seat trim in unique colours, and the ambient lighting can switch between seven different colours, too. The Ranger features Ford's SYNC3 infotainment system with voice control, sat nav, an 8-inch touchscreen and Apple CarPlay and Android Auto connectivity plus a reversing camera.

Underneath the bonnet is a 3.2-litre TDCi diesel engine with 197bhp, which is the sole engine choice in the Wildtrak. There’s a choice of two gearboxes – a six-speed manual and a six-speed automatic. The five-cylinder unit doesn’t sound as agricultural as you might expect from a pick-up. Accelerating hard results in a rattly note from underneath the bonnet but otherwise it’s all quite civilized. The automatic gearbox works well too, shifting up and down the gears smoothly. Acceleration from 0-62mph takes 10.9 seconds in the manual, and 10.6 seconds in the auto.

High-profile tyres and a raised ride-height help ensure the Ranger rides smoothly on the road, although it will bounce around unless there's some weight in the load bed. It’s even better off-road, with bumpy tracks seemingly flattened out by the supple suspension. And when the going gets tough, the low ratio gearbox and switchable four-wheel drive reveal the Ranger’s go-anywhere capability.

But there are a few pick-up truck characteristics Ford hasn’t managed to escape. For instance, the cabin – despite boasting leather seats and the latest infotainment system – isn’t as up-market as Ford’s other models. A few hard and scratchy plastics drag the quality down slightly.

Then there’s the fuel economy. Ford claims the Ranger 3.2-litre automatic will do 32.1mpg and emit 231g/km, while the manual claims 33.6mpg and 221g/km. In comparison, the 2.2-litre four-cylinder diesel in the Ranger Limited manages 40.4mpg in manual guise.

Prices for the Ranger kick off at £18,645 if you're buying it as a commercial vehicle excluding VAT. But private buyers going for the Wildtrak will be looking at a price tag starting from around £33,500. Rivals for the Ranger Wildtrak include top-spec versions of the Nissan Navara and Mitsubishi L200, which have four-cylinder diesel power and the VW Amarok, which comes with a V6 diesel. There's also the Mercedes X-Class, which redefines premium quality in the pickup truck class, but has a price tag to reflect this.