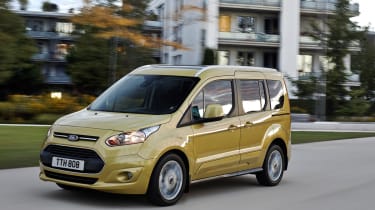 Van-derived MPVs often struggle to shake the feel of their commercial vehicle roots, but Ford has produced a genuine family car that offers low-running costs and quality interior combined with the robust build of its van underpinnings. But the main draw for this car is its price – compared to a five-seater C-Max in the same spec and with the same engine it costs around £2,000 less, which is hard to ignore.

Ford has a stellar reputation in the commercial vehicle market and is know for its stylish MPVs, so why not combine the two? The Ford Tourneo Connect does just that and takes on the likes of the Fiat Doblo and Citroen Berlingo.

It’s immediately apparent that Ford’s offering is some way ahead of its Italian and French rivals, especially its engine. The 99bhp 1.0-litre Ecoboost engine, that has been so impressive in the Ford Fiesta and Ford B-Max, performs well, and rarely feels out of its depth. There’s decent shove right through the rev range and the six-speed gearbox is slick and positive.

Opt for this engine in Zetec trim (expected to be the most popular specification when paired with the diesel engine) and the 129g/km emissions means you’ll pay just £105 in Vehicle Excise Duty – a small price for a roomy five-seat MPV. Perhaps more importantly, anyone lower rate tax payer buying it as a company car will pay just £44.88 per month.

Its donor car might be the Transit Connect, but the Tourneo is also based on the same platform as the Focus. As you’d expect, it isn’t as involving as the family hatchback, rolling around in corners thanks to its high-sides van-like silhouette, but it’s more enjoyable than any of its rivals.

The ride is also impressive, and the cabin quiet, distancing it further from most people’s preconceptions of commercial vehicles - and that continues with the interior of the car. Large overhead storage and rugged build quality are all clues to its commercial vehicle origins, but the design and layout is similar to the C-Max, so it’s not unattractive to look at.

One of the key factors of this car is the space on offer. The high shape means there’s plenty of headroom, while 1,029-litres of bootspace (a massive 558-litres more than the C-Max) is also impressive – made better by the incredibly low loading lip that makes lifting heavier items in the back less taxing. The rear seats also fold completely flat (increasing the loading volume to 2,410-litres) as well as splitting 60:40.

Ford is under no illusions with the Tourneo Connect; it knows that buyers of this kind of car care more about value-for-money, space and durability than style and driving enjoyment. And while it’s definitely achieved its goals, it’s also done a decent job of making what could be a boxy bore of a car, not nearly as dull as you might think.