The four-door saloon provides Honda Civic buyers with greater choice, but is it worth considering? 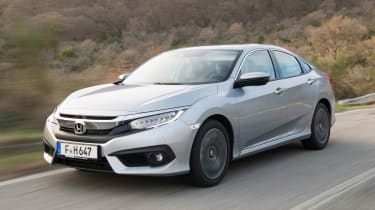 The new Honda Civic saloon adds another string to the family car’s bow. It commands a premium, but such a small difference will pale into insignificance on a monthly finance deal. In diesel form, it’s capable of impressive real-world economy, too, without sacrificing fun or refinement. Whether you choose one over the hatch will, ultimately, come down to personal taste.

With the proliferation of crossovers and SUVs, the family saloon market is dwindling. But that isn’t stopping Honda from introducing a four-door version of its popular Civic in the UK.

If you see the exterior design of the Civic hatchback as a bit too daring, then you might find the saloon more appealing. Its elongated shape, thanks to its separate boot and toned-down bumper design, makes for a more restrained appearance. Honda reckons it could even draw interest from owners of the old Accord, thanks to its similar proportions and boot size.

Most of the visual changes happen aft of the front doors and include a sloping roofline and raised rear haunches. The boot itself isn’t all that much larger than the hatchback’s: it measures in at 519 litres, compared to the five-door’s 478 litres. The aperture is wide, but it lacks the convenience and access of the hatch. 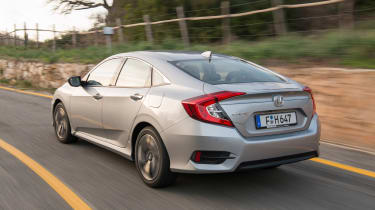 On the inside, the saloon is near-enough identical to the normal Civic, with really good space for passengers both front and rear. The driving position provides plenty of adjustability and there’s good visibility all around, too.

In the UK, the Civic saloon will be available with either a 127bhp 1.0-litre i-VTEC three-cylinder turbo petrol engine, or a frugal 118bhp 1.6-litre i-DTEC diesel. The more powerful 1.5-litre petrol isn’t an option in the saloon for now. Every car gets a six-speed manual gearbox as standard, with an auto available on both cars.

From SR trim upwards the Civic gets Honda’s seven-inch touchscreen infotainment system as standard, with specs largely mirroring the hatch. The screen isn’t as intuitive to use as some rival systems, but does feature Apple CarPlay and Android Auto connectivity. 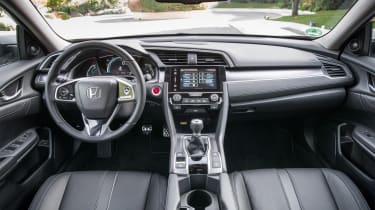 Over broken road surfaces, the stiffness of the Civic’s suspension becomes apparent, though it soaks up most of the bad stuff without being too jarring. The saloon doesn’t get the adaptive dampers that feature in higher-spec hatchback models, but the four-door car feels just as well-sorted for the most part. Despite the boot being separated from the interior of the car, it doesn’t seem to make things any quieter on the move, so the saloon is still susceptible to road noise on broken sections of motorway, for example.

It’s the diesel we’re testing here. It feels punchy from the off, but does lose some of its sheen when worked harder. It lacks the strong shove of torque found in some of its rivals, and this deficit is more noticeable with four passengers.

But it’s when you get the diesel Civic onto a motorway that it comes into its own. It’s here that many diesel buyers are likely to spend their time and – like the hatchback – the saloon rewards in that respect. Any gruffness that the in town soon dissipates at higher speeds.

However, if you stick mainly to urban commutes, you will be better served by the petrol car, which, despite the engine’s small size, offers better refinement and sufficient performance. 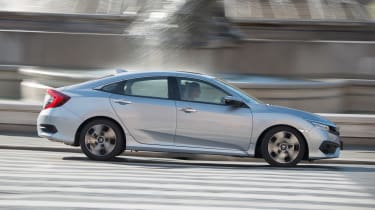 The saloon’s steering is direct, and the chassis is more responsive than many of its rivals’. A precise and satisfying gear shift reinforces the feeling that the Civic is one of the more engaging mainstream saloons on sale.

Honda equips all Civic saloon models with its ‘Sensing’ suite of driver assistance and safety features, including lane departure warning, lane keep assist, traffic sign recognition and adaptive cruise control. The latter is one of the better systems we’ve tried.