The new Honda Civic Sport belies its entry-level status, but is it a better buy than its Mazda 3 rival? 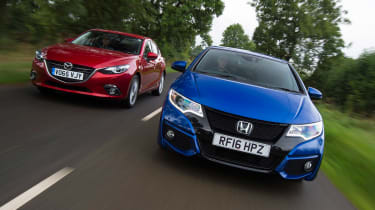 Honda pulled the covers off its all-new 10th generation Civic last week at the Paris Motor Show, but that doesn’t mean it’s finished with the current car just yet. In an effort to send the family hatch out on a high, the brand has launched an eye-catchingly priced entry-level model. And this is no ordinary bargain basement buy.

Called the Sport, it gets a racy look inspired by the Type R flagship, plus there’s a kit list you’d expect on much pricier machines. Honda has also fitted the newcomer with its tried-and-tested 1.4-litre engine.

But it’s not the only sporty hatchback with a small-capacity petrol engine and wallet-friendly price tag. Like the Civic, the Mazda 3 is due to be upgraded, but even in its current form, it serves up plenty of style and driving fun for buyers on a budget.

So which of our contenders delivers a better mix of driving thrills, low bills and family friendly usability?

Look beneath the Honda’s angular lines and you’ll discover a versatile family hatchback. Its vast boot packs a healthy 477-litre capacity, plus it gets the brand’s Magic Seats. The Mazda isn’t nearly as versatile, offering a smaller 364-litre boot. And while it’s as spacious inside, smaller windows make it feel claustrophobic. 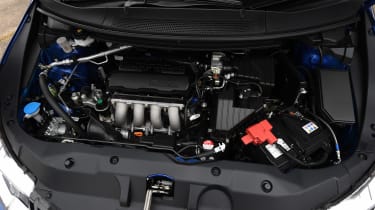 Both our contenders have ignored the current trend for downsized turbocharged units. While the Honda’s 1.4-litre engine is new to the Civic, it has been tried and tested in the Jazz supermini. The Mazda’s 1.5-litre engine is also used elsewhere, even appearing in the MX-5.

The Mazda gets sat-nav as part of its MZD Connect system. There are also a number of apps to choose from, including DAB. Honda’s system does without nav, but the Mirrorlink function allows you to beam your phone display on to the touchscreen. 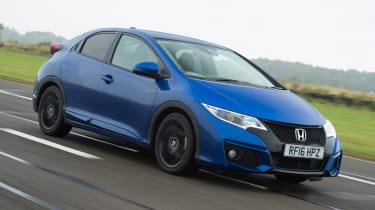 A sporty makeover and a sprinkling of extras have helped inject some much-needed showroom appeal into the Honda Civic. It’s also spacious and attractively priced, plus it’s backed by some tempting finance deals. The 1.4-litre engine delivers leisurely performance, making the Sport a dependable, roomy and well equipped family hatchback for not much cash. 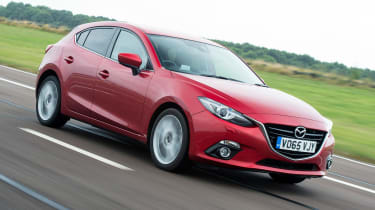 Sleek styling, a classy interior and engaging driving dynamics make the Mazda look and feel more expensive than its rival here. And while it’s not as well equipped or practical, it gets all the essentials plus the desirable addition of sat-nav. You should be able to negotiate a healthy discount as dealers look to clear stocks in the run- up to the facelifted model’s arrival. 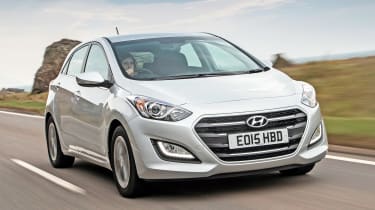 Stylish and well equipped, the Hyundai follows the lead of these contenders by using a naturally aspirated petrol engine. Performance is leisurely, but the i30 is spacious and backed by a confidence-inspiring five-year warranty. 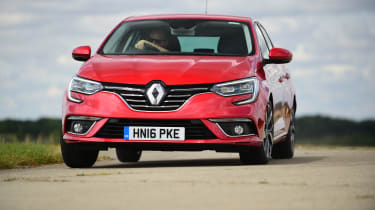 The Renault gets sat-nav, but lacks much of the Honda’s desirable kit. However, the downsized turbo packs a bigger punch, and boasts greater efficiency, while supreme comfort makes up for lack of driver fun.