The new HR-V is Honda's play for a piece of the lucrative compact crossover pie. How much will it get? 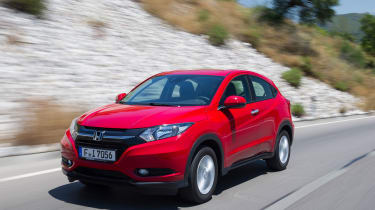 Forget the Civic Type R and NSX, it’s the HR-V and new Jazz that are the crucial new cars for Honda. Sitting somewhere between the Juke and Qashqai for space, the HR-V is a pricey compact crossover but it has a lot going for it – it’s good looking, well made, spacious and in diesel form offers wallet-friendly motoring. If the idea of owning a roomy car in a compact body and with the added peace-of-mind of Honda reliability appeals, the HR-V should be high on your list.

The NSX and Civic Type R may well be the cars whipping up some much needed excitement around the Honda brand at the moment, but the one that has the tough job of selling in large quantities to the average person on the street is the new HR-V.

The last time we saw these three letters glued to the tailgate of a Honda was on the quirky HR-V of 1999 - part estate, part hot hatch and part SUV. This time around it's something more conventional, albeit sitting between the established competition. It uses the same platform as the next-generation Jazz supermini, but with a length of 4,294mm it’s 159mm longer than a Nissan Juke. However, it has the interior space to rival the likes of the larger Nissan Qashqai rather than the Juke. 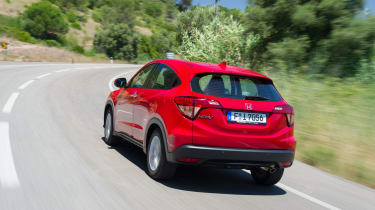 Honda has form here, though. Take its CR-V SUV – a clear rival for the Qashqai, Kia Sportage and Mazda CX-5, it’s noticeably larger with a roomier cabin. The HR-V then sits in the strange middle ground between Juke and Qashqai, Captur and Kadjar and CX-3 and CX-5. And with prices ranging from a sniff under £18,000 and rising to around £25,000 it's positioned neatly between these two markers.

The HR-V doesn’t follow the Tonka toy styling of the Jeep Renegade and nor does it play with cutesy lines like the Fiat 500X, instead it goes for a more high-riding sporty look. The combination of a rounded front, curved window area and arching roof line all give the HR-V a jacked-up coupe look, all helped by the pronounced crease running through the two side doors that meets up with the window line, and the hidden door handle on the two rear doors.

To the rear there’s boomerang-like lights – but they’re only the real styling flourish on a back-end that boarders on being plain; the Mazda CX-3, Renault Captur and even larger crossovers like the Qashqai are more distinctive. Having said that, the HR-V is a world away from its larger brother’s awkward and boxy styling. 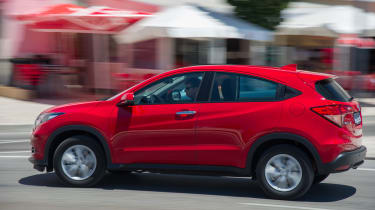 The bold outside look is continued onto the inside as well. The dashboard’s design is refreshingly upmarket – the fascia is angled towards the driver and the use of piano black trim gives the HR-V a sophisticated look. A high centre console gives a sporty feeling and the cabin has a number of nice design touches like the thin, stubby gearlever that feels really good in the palm of your hand, and a 3D-like speedowhich has an outer rim that not only can be personalised to the colour of your choice, but also glows depending upon how eco-friendly you’re driving. A quality-feeling leather wrapped steering feel is a nice touch, as are the climate controls that are housed in a classy touch-sensitive panel just under the seven-inch touchscreen.

It’s just a shame then that the upper part of the dash is made out of scratchy hard plastic and the sat nav system is out of step with the rest of the near-premium feeling cabin. SE Navi and top-spec EX models don’t use a bespoke Honda system and instead rely on a Garmin system. It’s relatively easy to use but its bright colours and clunky operation do not sit well with the Android-based infotainment’s other features such as the slick home menu that includes internet radio, MirrorLink, internet browsing and an assortment of apps which can be downloaded from the Honda Store. Aside from this, standard kit is good with even the entry level S model coming with 16-inch alloys, Bluetooth, climate control, cruise control, front and rear parking sensors and heated door mirrors. 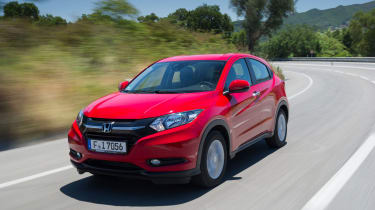 The HR-V’s interior space will be enough to sway a lot of buyers, though. Up front it’s easy to get a good driving position thanks to plenty of steering wheel and seat adjustment, and despite there being a high centre console separating the driver from the front seat passenger, it feels spacious. A large cubby hole in the centre console with clever pop-out dividers allow you to store drinks and other oddments is a nice touch and so too is a large area under the centre console. Here you’ll find USB and HDMI jacks to charge your phone, and as it’s under the centre console it’s hidden from prying eyes.

In the back there’s acres of rear legroom even if a six-footer is behind the wheel and the 470-litre boot is 40 litres bigger than the Nissan Qashqai. Fold the rear seats down and there’s 1,533 – that’s around 50 litres down on the Qashqai but around 250 more than the CX-3 and nearly 350 more than the dinky Juke. Opt for the panoramic glass roof (standard on top-spec EX) and those in the back will be suffer from cricked necks. However, the HR-V’s trump card is its Magic Seats; pinched from the Jazz the rear seat squabs can be folded up against the seat backs allowing tall items like plants to be safely carried inside the car as opposed to rolling around in the boot. 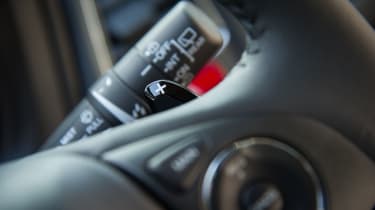 It won’t just be the plants that roll around in the HR-V but the people on board too. While it may have sporty looks, Honda didn't want to put off its core buyers by making the suspension too firm. Show the HR-V a series of twisting bends and it’ll lean, but it means that its easily the finest riding car in the class gliding over potholes instead of crashing into them – and that makes a change over some over hard-riding compact crossovers like the Nissan Juke.

Honda is offering just two engines in the HR-V all in two-wheel drive; a brand new 128bhp 1.5-litre i-VTEC petrol and a 1.6-litre i-DTEC diesel. We drove the latter and, again, it’s a mixed bag – it’s the same engine as used in the Civic but while it’s the perfect partner in that car, it’s noisy and a little harsh in the HR-V. With 118bhp it’s not tremendously powerful either and can feel a little breathless when accelerating through first gear and into second. But it does reward your wallet – claimed figures are 68.9mpg (on our EX model) and we averaged over 55mpg on our test route – and annual road tax is just £20. 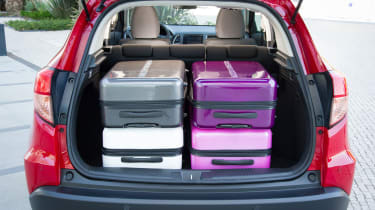 Aside from the growly diesel, the rest of the HR-V is decent. Steering feel is never really evident but it’s light, accurate and allows you to easily place the car on the road, while the stubby gearlever is mated up to slick-shifting six-speed box. An electronic parking brake features a handy auto hold and release, and Hill Start Assist and city braking are standard across all models. Mid-spec SE, SE Navi and top drawer EX models come with the full suite of Honda safety kit like a Cross Traffic Monitor, Forward Collision Warning, speed assist (which not only alerts you of your speed but also accelerates and decelerates the car), Lane Departure Warning, Highbeam Support and Traffic Sign Recognition.

With the HR-V S petrol starting at £17,995 and the top-spec EX diesel at just under £25,000 Honda has positioned it as an expensive B-segment crossover and a competitive C-segment crossover. Whether you should buy one or not comes down to what you want: If the idea of a spacious, comfortable small crossover appeals then the HR-V is a good option, but the appeal of the larger and well proven Nissan Qashqai for similar money is strong.