Is the new Hyundai i20 a real rival to the Renault Clio and Ford Fiesta in the supermini class? 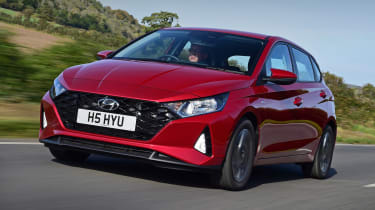 Hyundai’s new i20 is a serious contender like never before. The cabin is disappointingly dull but this is also a car with an entertaining, accomplished chassis, a smooth and efficient powertrain, solid in-car tech and some appealing finance offers. It’s practical for the class, too. So if you’re in the market for a new supermini, this should definitely be on your shortlist.

If you’re currently scrabbling to recall the outgoing generation of Hyundai i20, we won’t hold it against you. The Korean brand’s most recent supermini was a pretty anonymous creation, lost in a class where the benchmarks for driving dynamics (the Ford Fiesta) and cabin space and quality (Renault Clio) are extremely hard to beat. But prepare yourself for a shock: based on this first drive of a full UK-spec car on British roads, the new Hyundai i20 is a very convincing proposition indeed.

In theory this i20 sits on a developed version of the previous car’s platform, but you’ll find it hard to detect any connection at all, such is the difference from behind the wheel. Indeed, this model has been engineered with the forthcoming hot i20 N in mind, featuring the input of former BMW M Division man Albert Biermann, now head of R&D at Hyundai-Kia. And it shows.

This will come as a surprise to anyone who’s driven the outgoing i20 - and who can even remember doing so - but the latest version is every bit a proper Fiesta rival in the way it handles and steers. There’s still not a great deal of communication from the front wheels as you load up the inputs, but the reaction from the front end is there all the same - direct and positive, and accompanied by precious little body roll.

The six-speed manual gearbox (which decouples the engine to improve economy) is pleasingly smooth to use too, so find the right stretch of road and there is entertainment to be had. Should you wish, you can flick the car into Sport mode for this, improving the throttle response a little. But like most of these systems, it’s a switch we’d rarely find the need to use.

Under the bonnet, regardless of your choice of trim level, is a 1.0-litre turbocharged three-cylinder petrol engine, boosted by 48-volt mild-hybrid tech that takes energy that would otherwise be lost under braking and then feeds it back through to assist with stop/start, acceleration from rest and efficiency when cruising. 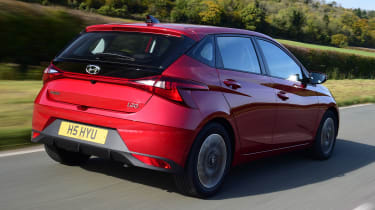 The overall output looks relatively modest - 99bhp and 172Nm - but in practice it works extremely well. The engine is a bit of a gem on its own, frankly, running extremely smoothly up to 3,500rpm - by which point its best work is already done. Factor in the MHEV assistance and you end up with a powertrain that has a sweet bubble of torque from barely 1,400rpm and which is quite capable of living up to its suggested gearshifts to cruise around town in sixth.

When the motor cuts in and out (and it does), you’ll only really notice it if you see the rev counter dropping to zero. There’s no shake or judder at all, even as the engine fires back up again, and once you’re cruising along, any three-cylinder hum fades away to the point where wind noise from the side mirrors and tyre noise drown it out. Regardless of price point or car size, this is one of the smoothest MHEV systems we’ve yet encountered.

The trade-off for the impressive body control is a firmer ride than you’ll find on many of the i20’s rivals, but there’s still enough complexity in the damping to soothe out most surface imperfections, and it cushions nicely over speed bumps. We do suspect, however, that our entry-level test car’s 16-inch alloy wheels were contributing a little extra tolerance here; check how posher i20s feel on 17-inch alloys before being seduced by their more extensive equipment lists.

Move up to Premium (£20,795) and you get LED headlights and tail-lights, folding side mirrors, automatic wipers, climate control, heated front seats and steering wheel, and a front arm rest - plus those 17-inch alloys.

Top-spec Ultimate trim weighs in at £22,095 and includes a contrast-colour roof, keyless entry and start, a wireless charging pad for smartphones, blind-spot collision warning and a Bose premium sound system. 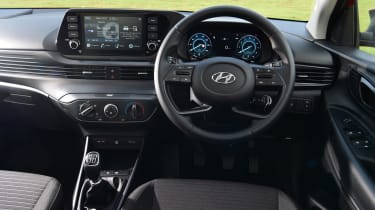 Biermann’s input has helped to transform the i20 into a real driver’s supermini, then - and we applaud that. But sadly, it has not quite extended to making the cabin a special place to spend any great amount of time. It’s not that the basic design isn’t functional and smart enough; our entry-level SE Connect model had straightforward rotary controllers for the heating and ventilation, plus a decent eight-inch infotainment screen mounted sensibly high up on the fascia.

The build quality feels tight, too, with no major creaks or rattles. And there’s space on board for four six-footers, plus a 352-litre load bay that’s among the larger in the class.

No, it’s the perceived quality and finish that let the side down a little, for the dashboard has pretty much the full gamut of black and dark-grey plastics, few of them matching and not all of them containing any discernible texture.

The likes of the Fiesta manage a fake leather grain here, a flash of chrome or slice of piano-black finish there, just to break up the monotony. Even Hyundai’s i10 serves up a bit of colour. But there’s none of that in an SE Connect i20, and the overall effect looks bland and cheap. On this score, at least, Hyundai’s offering is still a notch behind Ford’s - and it’s shown the way comprehensively here by the current Clio, our class favourite.

There’s better news on the pricing front, though. Hyundai’s initial representative PCP offer looks expensive on paper, at £244 pounds per month compared with the £175 you’ll pay for a mild-hybrid Fiesta on comparable terms (36 months and around 8,000 miles per year). But then, the deposit on the i20 is just £2,000, whereas Ford asks £5,333 - so over the full term, the Hyundai will cost you almost a thousand pounds less.