The Hyundai i30 Fastback N and Skoda Octavia vRS Challenge major on both practicality and performance, but which hot hatch does it best? 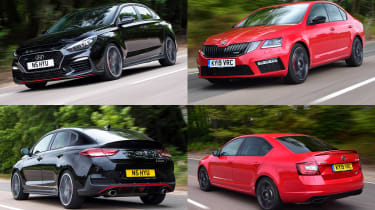 Hyundai launched its i30 N hot hatch in 2017 and the car immediately made a splash, upsetting the status quo and ruffling the feathers of models such as the Volkswagen Golf GTI and Peugeot 308 GTi.

In top Performance spec, however, the Korean hot hatch is undoubtedly a hardcore car, so with the addition of this longer, sleeker i30 Fastback N, the company has softened it off slightly to make it easier to live with. The new bodystyle puts it squarely in the firing line of the Skoda Octavia vRS Challenge – a big hatchback with plenty of performance to rival the Hyundai.

Both match up on price, with only £105 difference in the Hyundai’s favour. However, the i30 N also performs a little better on paper. Let’s find out which is the best all-rounder. 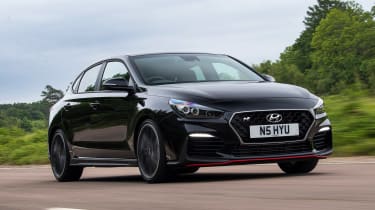 For: Slightly softer character makes i30 easier to live with – but it’s not lost its edge, performance for the price.Against: Quality could be a little better, suspension is still too firm in some situations.

We’ll start with the elements that are new here. While the set-up has been softened, the Fastback’s bodyshell is around seven per cent stiffer, which makes the platform more rigid. This gives the suspension a better, less corrupted basis to work from, allowing Hyundai to reduce the size of the front anti-roll bar and soften the bushes to take the edge off the harsh ride. Make no mistake, this car hasn’t gone soft, and it’s still skewed towards the firm end of the scale, but it’s crucially a little more usable.

While this setting still means the i30 N feels alert, in the Fastback the change is palpable; the car is now a little less edgy. However, it’s also nicer to drive quickly, because you don’t feel like you have to be quite as on top of the steering to forcefully guide the i30 where you want it to go. There are still some quirks to the set-up, which feels too heavy and artificial in its weightiest mode, but it’s a little easier and less draining to drive fast. 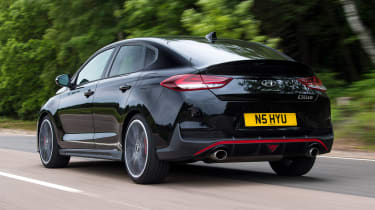 And you will drive the i30 quickly, due to all that power. Unlike the five-door there’s no ‘lesser’ version of the N Fastback; it comes only in Performance trim. With 271bhp and 378Nm of torque on overboost, against the Skoda’s 242bhp and 370Nm, it’s rapid. We coaxed a 6.3-second 0-60mph time from the i30, while this model, with its extra power and torque, was also quicker than the Skoda in-gear; its 3.4 seconds from 30-50mph in fourth – relative to the Skoda’s 4.1 seconds – shows how much grunt it has.

In N mode with the exhaust in its sportiest setting, there’s a loud rally car-style burble that gets even noisier with revs. It’ll pop and bang, too, and while this might seem contrived to some, just as many people will love it. Because the powertrain is the same as before, this shouldn’t come as a surprise. What is more interesting, though, is that things feel a little more fluid, although the change seems slight in Normal mode. The car has not really lost anything when it comes to body control; rather the slightly more relaxed set-up makes it feel more composed over bumpy tarmac. 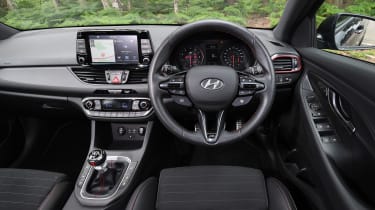 The steering is quicker and more engaging than the Skoda’s, and the car feels better balanced, with a more neutral stance in corners. The diff helps, and in N mode you can feel it locking up more aggressively to find more traction and better deploy the power.

Apart from the bodystyle change, the cabin stays the same. The quality of the materials isn’t quite up to the Octavia’s standard, but the level of tech on offer is strong. There’s eight-inch infotainment with nav, Apple CarPlay, Android Auto and connected services. Bluetooth, cruise control, DAB, wireless charging and safety systems are also all present. 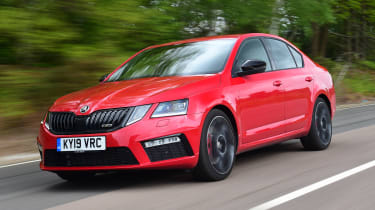 For: Huge practicality, high-quality cabin and good technology, mature image.Against: Not as fast, capable or fun to drive as the i30 Fastback N, ride still crashy sometimes.

As with the i30 Fastback N, the Skoda vRS shares its DNA with other sporty models – in this case, the Volkswagen Golf GTI. They both use the same MQB chassis, but the platform is longer and larger here, meaning the vRS offers plenty of usability. It’s a more pragmatic solution to the problem of combining performance with practicality.

The former comes from a 2.0-litre four-cylinder petrol turbo, but this kicks out less power and torque than the Hyundai, at 242bhp and 370Nm. Although the Skoda is lighter at 1,365kg, this wasn’t enough to offset its power deficit in our tests: the Octavia managed 0-60mph in 6.8 seconds. It’s still quick, but half-a-second slower than the Hyundai. There’s more than enough grunt, though: its 30-70mph time of 5.5 seconds through the gears is impressive, even if the i30 did it in 5.3 seconds. 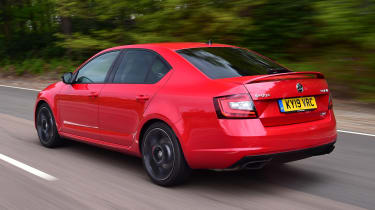 It’s an enjoyable process, too, because the gearshift is sweet. It’s not the most mechanical or satisfying action (the i30’s feels more positive and slightly less reluctant to go into gear), but the weight is good. Changes still slip home sweet enough in the Skoda.

However, the Octavia feels flatter to drive, without the effervescent zip the Hyundai has from its raucous engine. By contrast, the Skoda’s motor feels much more muted. There are fewer aspects that you can configure, but as with the Hyundai the standard-fit adaptive dampers, the engine and the steering can be tweaked individually or using pre-set modes for a softer or more racy drive.

Even though the Hyundai has been softened off, the Skoda’s damping in Comfort mode is gentler still. It feels like the vRS has a narrower spread between the two extremes of its damping scale, and that the window over which it operates is skewed slightly more towards comfort than in the i30. 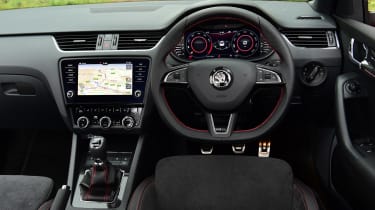 While the Hyundai’s steering hardly brims with life, the Octavia’s is light and even less engaging. The car is as agile and almost as grippy as the i30, but even though it’s virtually as technically competent, it doesn’t feel as much fun. These models are all about enjoyment, so this makes up a big part of the experience, and here the i30 scores higher than the Skoda due to its stronger character.

However, such cars also have to deliver ability in many other areas, and the vRS definitely does this when it comes to quality and kit. In top-spec Challenge trim the Octavia gets 19-inch alloys, heated Alcantara sports seats, front and rear parking sensors, keyless operation, adaptive dampers, an electronic limited-slip diff, sat-nav, autonomous braking, cruise and climate control, phone connectivity plus a lot of safety tech. 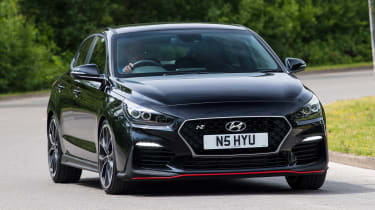 The i30 N is subtly easier to live with in Fastback form, and more practical than the hatchback. It loses out to the Skoda for usability but offers more fun, which is what these cars should prioritise. The Hyundai will be pricier to run, but you get a great level of kit with the i30 N. 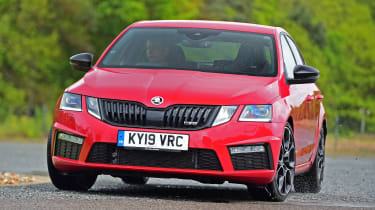 The vRS is more usable, higher quality and cheaper to run than the i30. But for similar money you don’t get as much clout under the bonnet, nor is it as involving. The Hyundai closes the gap to the Skoda for practicality, while it’ll also be more fun and more capable to drive more of the time.