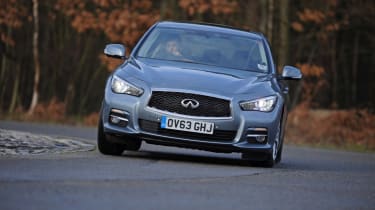 The Infiniti Q50 diesel wants to be more than just a choice for people who don’t want a German exec. Sadly, it isn’t. Much as we like the style (inside and out), the tech and quality, the driving experience is way off the class best – the steering is just plain odd and the engine could be more refined. If you really can’t bear to buy a German executive, we’d check out a Lexus IS 200 before this.

We've already driven Infiniti's new Q50 hybrid, but that was officer material compared with this, the Infiniti Q50 diesel foot soldier that’s going into battle against big-selling versions of the BMW 3 Series, Mercedes C-Class and Audi A4.

The Q50 range kicks off at £27,950 for an SE model (we tested a £30,350 Premium) with a Mercedes-sourced 2.2-litre diesel under the bonnet. It sits closest to a BMW 320d on price and power, yet while the 3 Series out-punches the Q50 for performance, the Infiniti has better economy and emissions.

Fire up that Merc diesel and you may think you’ve a long day ploughing fields ahead of you. It’s always a bit rattly driving around town, but is refined and with decent in-gear grunt on the motorway.

That’s where the Q50 is at its best – the ride is generally comfortable, as is the cabin. The driving position is good and the controls nicely laid out, apart from the selector for the three driving modes which, oddly, sits back by the driver’s left elbow.

You do get a smattering of Nissan switchgear, but the quality is impressive, while the interior style brings a welcome, cosy alternative to the restrained offerings from German execs.

Space in the back is very good and the boot is big, too. Visibility all round is excellent, helped even further if you opt for the £1,040 Visibility Pack with 360-degree-view cameras. The swoopy lines outside draw plenty of interest, too – this is a good-looking car, but not as sleek and modern as a Lexus IS.

Yet while the Lexus’ dynamics are well resolved, offering a gentler dynamic approach than the German trio, the Infiniti tackles them head on. And it falls down, badly.

Let’s start with the steering, which is very odd. This model doesn’t get the super-advanced steer-by-wire system, but still manages to feel detached from the road surface. More bizarrely, it feels heavy at low speed, needs constant correction on the motorway and could do with more self-centring action to feel more natural. Grip levels are okay, though.

The manual gearchange could do with a massage to get rid of some of the notches, but the brakes are reassuringly strong.

Infiniti is positioning itself as something of a technology leader and there is a fair amount of clever kit available if you plunder the options packs. Every model gets a dual touchscreen system, but the top one (which was used for the optional navigation in our car) is a little old-fashioned to look at and touch. In contrast, the bottom screen is much slicker and like your average smartphone to use. Plus, there are myriad apps to play with.

The Q50 might not have much of a price advantage over a 3 Series, but its standard kit is slightly more generous. And crucially for a model that will be predominantly sold to company car users, the running costs stack up pretty well, too.