We review the Infiniti Q50, a BMW 3 Series rival which Infiniti hopes will really kickstart its sales in Europe 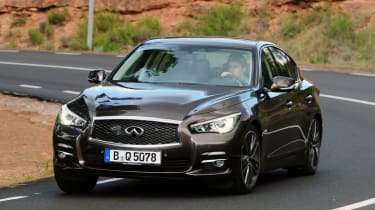 Infiniti is facing an uphill struggle in the UK - it sold just 25 cars in September from its eight dealers - but the Infiniti Q50 is a step in the right direction. The four-cylinder diesel isn’t the most refined engine around, but the performance and efficiency is up there with its German rivals. The styling is bound to split opinion, but the interior has a high-tech feel though and the ride is smooth enough. A good effort overall, but not enough to topple the class-leaders.

The predecessor to the Infiniti Q50 – the G37 – was a car only for the very brave. It was an unusual alternative to the usual BMW, Audi and Mercedes crowd but fell well short in terms of quality, dynamics and economy. Straightaway, the Q50 is a vast improvement – it’s comfortable, efficient and hi-tech.

Infiniti is planning to boost global sales from 100,000 to 500,000 in the next decade, and Europe-focused models like the new Q50 are crucial to this. So is this the car to kickstart an Infiniti revolution?

Previously we’ve only tried the flagship 359bhp Hybrid model but the diesel car driven here will be the big seller. It’s powered by a 2.1-litre diesel engine with 168bhp and, in its cleanest form, it emits just 114g/km. Go for the automatic gearbox and large alloys like our car, and that goes up to 128g/km – still good enough to compete with the BMW 3 Series.

The engine itself is borrowed from Mercedes and Infiniti hasn’t managed to cure it of the noisy rattly engine note. At idle and on light throttles it’s quite nicely isolated but under heavy acceleration it sounds loud and rough. That’s a shame because refinement is otherwise very good – motorway journeys are accompanied by little more than a whisper of wind noise and a gentle roar from the tyres.

The Infiniti Q50 rides quite nicely, too, just taking the edge off of sharp bumps while ironing out some of rough roads we encountered. There’s a hint of firmness to it as Infiniti chases the title of “most dynamic sports saloon on the market”, but in this respect it still falls short of the best.

There’s not too much body roll and there’s plenty of grip but the steering ultimately robs the Q50 of the involvement some drivers will want. We had the basic electro-hydraulic steering set-up but did try the upgraded Direct Adaptive Steering – standard on high-spec cars or an £800 option. It’s the world’s first steer-by-wire system, so there’s no link between the steering wheel and the wheel. You can vary the speed and the weight but none of the modes ever give you enough feedback, and setting the ratio to ‘quick’ makes the car feel extremely twitchy.

Interior design is classy on the whole, although some of the buttons are obviously lifted from cheaper Nissan models. On the plus side there’s a huge amount of room in the back seats and a spacious 500-litre boot.

The styling drew plenty of attention on our test drive, and you’re guaranteed a bit of exclusivity with an Infiniti that you don’t get with the German brands. It’s far from perfect – and at £31,990 it costs the same as a like-for-like 3 Series – but there are plenty of good reasons why customers should consider it.