Infiniti's Q50 is an interesting alternative to the established compact executive contenders in 2.0 T petrol form 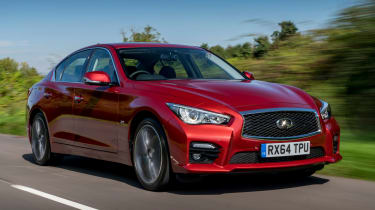 The new 2.0-litre turbo in the Q50 immediately makes it the pick of the range, but that in itself isn’t saying much. It’s quick, comfortable and refined but ultimately let down by an uncommunicative steering setup and poor interior space. In such a competitive segment currently dominated by almost faultless Germans, Infiniti need to do better.

Infiniti has broadened the Q50 range by offering the compact executive saloon with a new 2.0-litre turbocharged petrol engine. It sits alongside the current diesel and hybrid models, with the new turbo engine nestling between the two in terms of power as well as price.

Despite the new engine, the Q50 still has to face up to established opposition in the shape of the BMW 328i and Audi A4 2.0-litre TFSI. Happily, however, the smooth but punchy petrol motor gives the Q50 a significantly improved chance of tempting buyers in a way the diesel version could never manage. 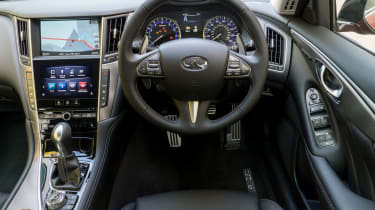 Refinement issues which plague the diesel model have been resolved in the petrol. There’s no shudder on start up or persistent drone from the engine when at speed and power delivery is smoother. Paired with a seven-speed automatic gearbox as standard, it’s also an accomplished cruiser, gathering pace quickly while the engine remains well isolated from the cabin. Even from low revs it pulls strongly thanks to all 350Nm of torque available from 1,250rpm.

Press on and the gearbox is slightly labored with its changes, even when you take control with the steering wheel mounted paddles. The Q50 is certainly more at home munching the miles than it is tackling a twisty B-road.

The ride is slightly compromised too, if you opt for a Sport model like the one we tested, as 19-inch wheels and run-flat tyres come as standard. It has a tendency to crash into imperfections but it’s an infinitely more relaxing and comfortable drive than the diesel and as a result, a lot closer to its German rivals in terms of capability. Economy is also on a level with the Audi and BMW, with 43.5mpg and CO2 emissions of 151g/km claimed. 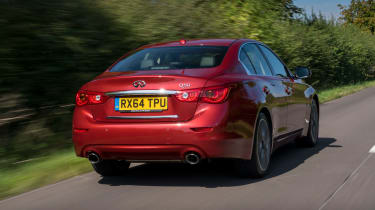 An area where the Q50 is still let down is the steering, however. The Direct Adaptive Steering which is standard on Sport models removes the mechanical link between you and the front wheels. Electric motors are used in its place which make you feel completely disconnected from the car. At slower speeds it’s not so noticeable but steering inputs at higher speeds or quick changes in direction are unnerving. It’s difficult to ever feel comfortable behind the wheel, as it almost feels like you’re driving a car in a video game.

But the cabin remains a strong point. It’s well designed, well executed and well put together. The infotainment system is intuitive and responsive but one criticism would be the larger of the dual-touchscreens has a rather grainy appearance, which clashes with the HD quality of the smaller display. 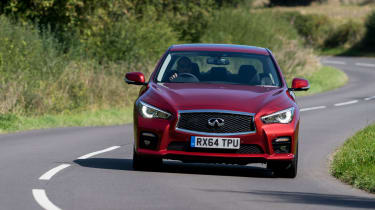 There’s no questioning the premium interior feel of the Q50 but the saloon is a little short on passenger space. Headroom is not good enough for a car of this size and knee room isn’t great either. An elevated middle seat and chunky transmission tunnel would make for three extremely unhappy and uncomfortable adult passengers in the back, too.