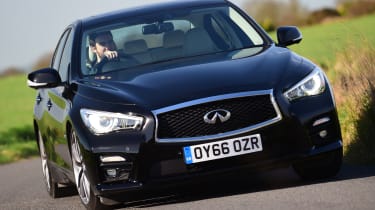 On a perfectly straight, smooth road this version of the Infiniti Q50 would be great, since its 399bhp 3.0-litre V6 is powerful and fun to use. Sadly the lifeless steering, unsettled ride and dim-witted gearbox drain the fun away on a normal road. Not only are its rivals - the BMW 340i and Mercedes-AMG C43 - cheaper to buy and run, they’re also better in almost every way.

Infiniti’s Q50 saloon takes on the BMW 3 Series and Mercedes C-Class in the crowded compact executive market, and sadly has failed to match its rivals in our previous tests in the UK.

Now we’ve had the chance to try this 3.0-litre model, which features a 399bhp petrol V6 engine in a bid to take on fast, high-spec models such as the BMW 340i and the Mercedes-AMG C43.

The Infiniti is significantly more powerful than either of those rivals, as the BMW has 322bhp and the Merc offers 362bhp. It sits in the middle on torque, however - the Infiniti’s 475Nm figure is slightly higher than the BMW’s and a bit behind the AMG Mercedes’.

Performance is excellent - the Q50 rockets from 0-62mph in just 5.1 seconds. It feels quick in-gear and even in the dry we found the engine’s output troubling the rear tyres for grip when pulling away quickly. Cornering grip is good, though, and there’s not much body roll either. 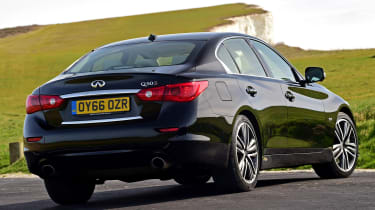 The engine is smooth and sounds pretty good as Infiniti has avoided the fake-sounding exhaust note of the C43 in favour of a more natural tone. Sadly that’s pretty much where the Q50’s good points end: there’s really no reason to buy one over the superb 340i or C43.

For a start the steering is numb, lifeless and doesn’t convey what the wheels are doing at all. In fact, sometimes you can feel the wheels move through a weight shift at the front end, but the steering stays dead straight in your hands. You can add weight using the driving modes, but it still feels completely unnatural.

The Q50 is heavy too, so to keep body roll in check Infiniti has fitted stiff suspension that makes the car feel unsettled. In corners you can feel it leaning heavily on its wheels, and so bumps shoot through the cabin (but not the steering wheel). The ride settles at higher speeds, but even around town the Q50 is more uncomfortable than its rivals.

The slow-witted gearbox can’t match its competitors’ either, as in automatic mode it often will kick down at the lightest touch of the throttle, lurching the car forward as all that power arrives at once. Still, in manual mode it changes reasonably quickly. 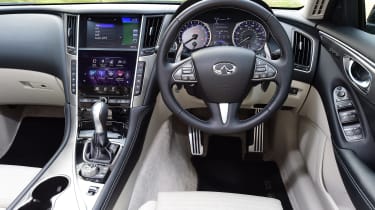 The Q50’s interior is definitely well put-together, but it’s full of cheap-looking and feeling plastics. The dashboard design is dull, and while the infotainment system that uses two screens is fairly easy to understand it’s annoying to use the touchscreens while on the move. Everything inside looks dated, especially next to the Mercedes C-Class.

The Infiniti’s claimed 31mpg figure is only a little behind the BMW’s 36.7mpg and the Merc’s 35.3mpg, and it is quite a bit more powerful than those cars. The Q50 is a heavy machine, however, and CO2 emissions of 206g/km bump it into a higher VED tax bracket.

At £45,970, the Q50 doesn’t even have price on its side. The better to drive, more comfortable, more efficient and better-finished BMW 340i costs from £39,680, for example. The Q50’s V6 engine is its main redeeming quality, but the straight-six BMW unit is even better.