Does powerful yet frugal Infiniti Q50 have what it takes to be a rival for the BMW 3 Series? 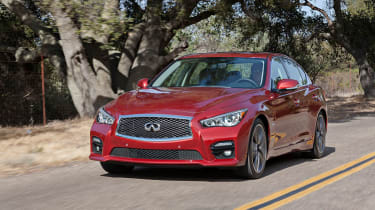 The Infiniti Q50 is a bold addition to its class, even if the execution is not quite up to scratch. The styling is striking but not necessarily pretty. The hybrid powertrain is fast, although it could be smoother. And the excellent interior design and build quality is tempered by some fiddly controls. Still, there’s plenty of room inside and lots of standard equipment, so we’ll reserve ultimate judgement until we drive the diesel model on British roads. This starts from £27,950 and should make far more sense for UK buyers.

The Infiniti Q50 is an all-new replacement for the G37 saloon – a car that remained rare in the UK thanks to its thirsty V6 engine. Infiniti is looking to rectify that this time around with a choice between a 168bhp Mercedes-sourced 2.1-litre diesel and the powerful – but relatively frugal – hybrid that we chose to review.

Combining a 3.5-litre V6 with an electric motor for a total of 359bhp, the Q50 Hybrid is capable of returning 45.6mpg. That’s roughly the same economy as a BMW 328i, yet with 114bhp more power. The Lexus IS300h is more efficient, returning 65.7mpg, but is three seconds slower in the sprint from 0-62mph.

The updated V6 is now significantly smoother than in the G37, and the droning exhaust is absent in all but full acceleration. The seven-speed automatic transmission is smooth and swift, too, and kicks down quickly to let you make the most of the strong acceleration.

The main problem is the integration of the hybrid system. At times, the transition from all-electric mode (which operates at low speeds around town) to combined petrol and electric power could be generously described as abrupt. On several occasions during our time with the car, engagement of the petrol engine caused violent surging and vibrations through the cabin.

Infiniti has made bold claims about the Q50’s handling. F1 world champion Sebastian Vettel was involved in its development, and the aim was to produce the “most dynamic and exciting sports saloon on the market”. The Hybrid comes as standard with firmer sports suspension and more powerful brakes, but even so it can’t match executive-class rivals for dynamic fun. The price of the new Q50 will start at £27,950 whilst the Q50 Hybrid will cost £40,000.

That’s partly down to Infiniti’s pioneering new Direct Adaptive Steering – an entirely steer-by-wire system. It reads the torque required by the electric motor on the steering rack and turns that into the feedback felt by the driver at the steering wheel. It offers three options for steering ratio and resistance, which can be selected independently or through the Drive Select System.

In normal mode, the system has no mechanical connection between steering shaft and steering rack. In case of sudden power failure, an electric clutch shuts, creating traditional (but non-assisted) steering. It’s clever, and is nicely weighted, but always feels artificial.

The benefit is that it opens the door to a raft of radar-assisted systems. The active lane control steers the car automatically to keep it centred in its lane, while the Distance Control Assist works to out-think the driver by automatically backing off the throttle when it senses the closing rate between the vehicle in front is too great. All of these systems represent a significant step forward technologically, but feel a little over-intrusive.

The interior of the Q50 is a significant improvement over the G37’s. Material quality is improved and the infotainment system now has two touchscreens in the centre console, one used primarily for controls and the other for display. It works far better than the previous system, although the layout can be tedious to navigate.

A few inches longer than its predecessor, and therefore a little more spacious in the back, there’s also a 500-litre boot – 20 litres larger than the 3 Series. As for the swoopy styling, it’s not our cup of tea, but the bold looks will definitely turn heads.