The Jaguar F-Type has been tinkered with for 2019, but are the minor updates enough to keep the ageing sports car competitive? 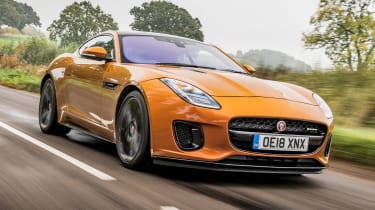 Given the fierce competition on offer at this level, it’s hard not to conclude that the upgrades for the MY19 Jaguar F-Type could, and should, be more significant – especially since the car is now five years old. Having said that, it’s still a great looking car that sounds superb and drives well. Overall, though, it’s time Jaguar put a bit more elbow grease into its best sports car.

The Jaguar F-Type was a stunning sports car when it was introduced in 2013. Since then, it has gradually evolved into a desirable range of Jaguars that come in various guises, and at various different price points.

You can buy a coupe or a convertible, with four-cylinder, V6 and V8 engines, with more hardcore versions of both being available in hot-rod SVR specification. Fundamentally, however, not much has changed beneath the skin during the last five years, which would be fine were the competition at this level not so fierce.

But it is, and during the time that Jaguar has subtly massaged the F-Type without ever radically improving it, the Germans have hit the ground running. Porsche has introduced a brand-new Boxster and a fresh Cayman, Audi has come up with an updated TT, and Mercedes has launched so many new sports cars it’s sometimes hard to keep count. Which puts Jag’s 2019 model year improvements in the shade. 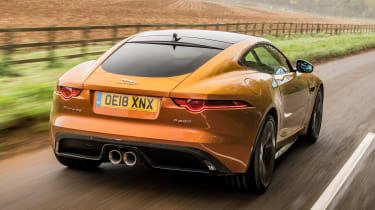 The range features P300 (the four-cylinder 2.0-litre model), P340 (the old 3.0-litre V6) and P380 (the supercharged V6 S) models, with the R and SVR versions badged as before. You can also opt for R-Dynamic trim levels on the four and six-cylinder models, which brings a switchable active sports exhaust, LED headlights and 19-inch wheels and tyres. There are also more paint options to choose from, including the Madagascar Orange of the car we tried, plus a new tinted rear screen.

There’s a new range of alloy wheel designs to choose from, a new 10-inch touchscreen, new air vents, and a frameless rear-view mirror. But aesthetically, that’s it.

So presumably there’s an extensive range of modifications beneath the skin to keep the F-Type competitive? Not really, no. All F-Types now get torque vectoring as standard, which is good, while the P380 we drove also gets a limited-slip diff and adaptive dampers, straight off the production line.

That said, there’s little wrong with the way the F-Type drives and, indeed, there’s still an awful lot to like about it. On the road it looks every inch like a £66,000 sports car. And it continues to drive wonderfully, too, with a rasping and properly loud soundtrack – thanks to the new active exhaust.

Performance of the P380 is strong but not sensational, not compared with the opposition at this level; the supercharged 3.0-litre V6 lacks a bit of mid-range punch beside its torquier rivals. The ride, too, is on the firm side on UK B-roads, although the steering remains excellent and the brakes impressive in both their power and feel. It’s only when you start thinking of Porsche Caymans and Alpine A110s that the F-Type’s slightly old school dynamics seem anything less than appealing.

Truth is, though, the F-Type needs a bigger tickle than this to keep it competitive, even if it is still one of the best sounding, best looking sports cars on sale.