Can Jag's mid-range petrol executive car tempt you away from the diesel options? 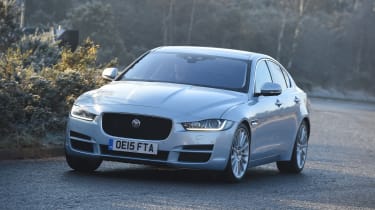 At first glance, you’d be forgiven for discounting this mid-range petrol as a pointless addition to the XE range. It’s neither as fuel-efficient as the diesels, nor as fast or powerful as the range-topping V6 S. However, it remains great fun to drive, while its ability to quietly munch miles on busy motorways is impressive. The fleet-friendly diesel remains our pick of the range, thanks to its superior fuel economy and low-down torque.

We're huge fans of the Jaguar XE here at Auto Express - so much that we've named it our top compact executive car, over the likes of the new Audi A4, BMW 3 Series and Mercedes C-Class.

Most of these cars will be bought by company car fleets, so most buyers will end up in one of the punchy yet frugal diesels, while those after punchy petrol performance will be unable to avoid the glorious 3.0-litre V6. But there is another option in the form of the lesser 237bhp 2.0-litre petrol unit we're testing here. 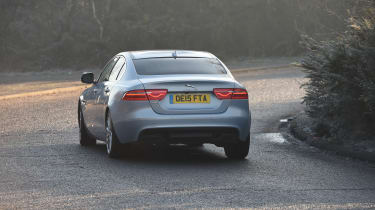 Available in plush Portfolio or racy R-Sport trim, the Ford-sourced unit comes paired with a slick-shifting eight-speed automatic gearbox as standard. However, compared to the fleet-friendly Ingenium diesel models, this petrol is disappointingly pricey to run. 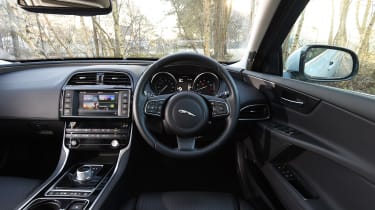 That’s not to say this XE feels off the pace in terms of performance. There’s plenty of shove from the turbocharged four-cylinder engine, and it feels suitably rapid off the line. It’ll easily shift through multiple ratios when you put your foot down, too, accelerating quickly from 30-70mph.

Plus, of course, the XE remains great fun to drive. The steering is direct and full of feel, while the rear-driven chassis feels taut and compliant. The ride is similarly impressive, especially in more luxurious Portfolio specification. Granted, it may not look as mean as an M Sport BMW, but there’s an undeniable class about the XE.

On the motorway, our test car shook off several hundred miles without breaking a sweat, remaining quiet and composed for hours on end. The seats are supremely comfortable, which allowed us to arrive at our destination as fresh as when we set off. 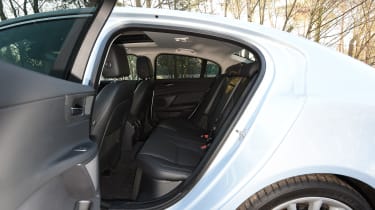 That said, we can’t help but crave more drama from the muted four-cylinder. The supercharged V6 in the XE S is lifted straight from the F-Type, and while it’s £11,255 more expensive, it makes the standard saloon feel like a real four-door sports car.

Engine aside, this petrol Portfolio is unchanged inside and out, meaning it features the same sloping roofline and slightly compromised rear seats as the diesel, as well as a boot that does fall shy of the class leaders. Up front, however, the high-grade materials and standard sat-nav make it a stunning place to sit.