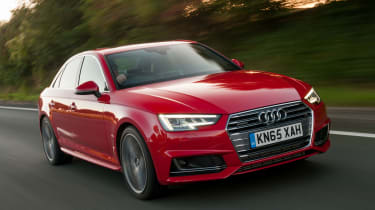 It’s tough at the top. The A4 has always trodden a careful path compared to BMW and Mercedes, but the new Jaguar XE has really shaken up the compact exec class. Audi’s concentrated on producing the car with the best interior, and its tactic has worked. The top-of-the-range A4 offers stunning performance, but keen drivers should still be swayed by the A4’s main rivals.

With the BMW 3 Series and Mercedes C-Class offering opposing character traits in the compact executive class for decades, Audi’s A4 has always struck a cautious path between them.

It’s never excelled in one department, but has offered a broader set of skills instead. That was fine – until this year, when Jaguar’s XE came along. 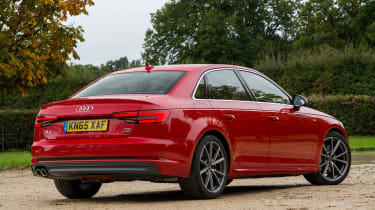 The newcomer seemingly blended all the fun and excitement of the 3 Series with the casual maturity of the C-Class – not to mention its added Brit cool factor. So the A4 exec is now treading a different path – and this is our first drive of it in the UK.

Audi is making a big thing of connectivity now being more important than ride and handling. This is where it’s pitched the A4; in its mind, this is the techy model in the class. 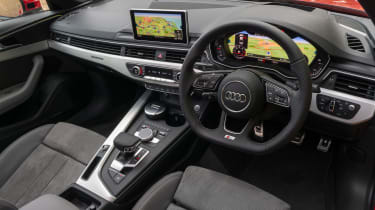 All versions have a good-looking screen with MMI multimedia system and smartphone interface – the latter supports both Apple CarPlay and Android Auto. Using the options list, the basic equipment can be upgraded to a vast range of larger screens, Internet-based apps and services, and also Audi’s clever Virtual Cockpit, which debuted on the TT.

The fact that both the 3 Series and XE offer sat-nav as standard even in their entry-level models, and the A4 doesn’t, leaves a bitter taste in the mouth, though. 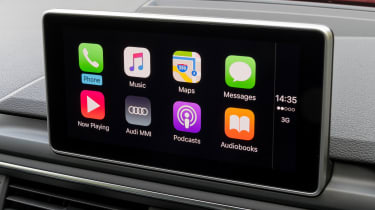 Up to now, we’ve only driven the A4s that are expected to take the lion’s share of sales across Europe – the 2.0-litre diesels. But for our first test in the UK, we slipped behind the wheel of the most potent model.

Until the arrival of the S4 early next year, the 3.0 TDI S line quattro is the most powerful car. Its V6 packs 268bhp and 600Nm of torque (there’s also a 215bhp version with front or four-wheel drive), and while those numbers don’t sound very spectacular, the real-life performance is. The 0-62mph sprint takes 5.3 seconds, and the standard auto fires seamlessly through its eight gears. 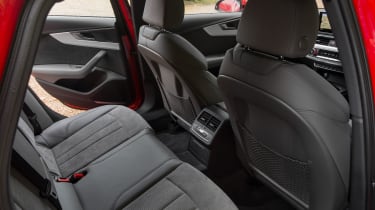 With the torque kicking in at only 1,500rpm, acceleration is very rapid – a sensation that’s heightened by the A4 being such a refined package. For this new model, Audi has tweaked the previous 3.0-litre V6. Economy has risen to 54.3mpg, while CO2 emissions are a claimed 137g/km.

While it’s impressive in a straight line, come to a corner and the TDI’s initial positive impression falls down a little. Turn the car into an apex, and while the chassis feels agile and flatters the A4, the steering doesn’t. It’s accurate but pretty much lacking in feel – and even when Dynamic is chosen on the Drive Select system, it only serves to add weight and exacerbate the numb feeling. 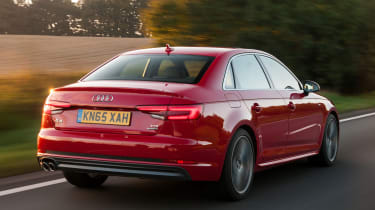 The Jaguar is leaps and bounds ahead of the A4 here, feeling tighter on turn-in and offering steering that brims with feedback. But Audi would point to the four-wheel drive giving extra traction through twisty corners, compared to the XE’s rear-wheel-drive set-up. The quattro system does give bucket-loads of reassuring grip, particularly in damp conditions – something that only the BMW 330d xDrive can come close to.

The suspension is a little disappointing, too. The standard S line set-up, lowered by 20mm, is firm at low and high speed. This is in sharp contrast to the XE’s excellent high-speed ride, even on R Sport models. It makes the Audi’s adaptive dampers a good investment (at £600), although the S line suspension can be deselected and swapped for the usual set-up free of charge. 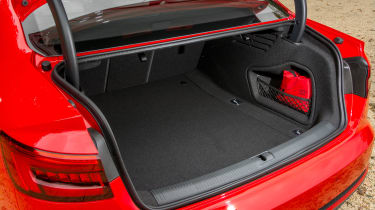 As standard, S line cars get a bodykit, part-leather trim, LED headlights and sweeping rear indicators, 18-inch alloys, three-zone climate control and sat-nav. It covers the basics, but the options list will seem appealing – and if you plunder this, the price will rise astronomically. The 3.0 TDI retails at £38,950, but our test car was nudging £52,000 – well into Audi A6 territory.

Despite this, it’s clear that your money buys quality. The interior is easily the class leader for build standards, far exceeding anything BMW, Mercedes, Jaguar and even Lexus can offer. There’s not a scratchy bit of plastic within reach, and every knob and button feels as though it’ll work forever. 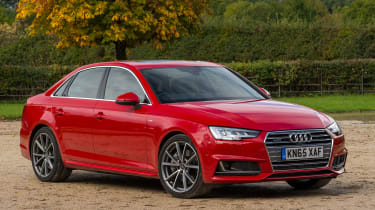 The details are good, too – the infotainment screen is crisp and the climate control one even sharper – it matches an Apple Watch for clarity. Add great rear head and legroom, and a well shaped, 480/965-litre boot, and the A4 offers an impressive package.