Jaguar XF vs Audi A6 vs BMW 5 Series

Can Jaguar’s new XF go straight to the top of the exec class? We test the new 2.0-litre diesel against the Audi A6 and BMW 5 Series 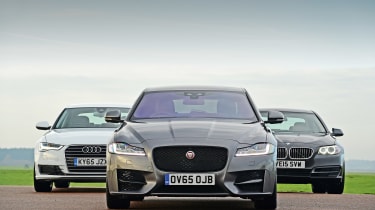 Jaguar's range of upmarket saloons just keeps getting better and better. The XE junior exec has already beaten the BMW 3 Series and Audi A4 this year, while the larger XF shrugged off the challenge of the Audi A6 when we tested them head-to-head last month. But those two cars featured 3.0-litre V6 diesels, which aren’t as popular as the more efficient 2.0-litre diesel trio we’ve lined up here.

These cars are the bread and butter of company car fleets, so if the XF wants to reign supreme in this hotly contested executive heartland it will have to beat its very strong German rivals once again.

The BMW 520d is a tough opponent, thanks to its blend of strong performance, frugality and upmarket looks. Plus, there’s a good amount of space on offer for the family.

Audi’s A6 Ultra maximises what you can get from a full tank, too, and teams this with usability, power and a sharp design. It reigned supreme in our 2015 New Car Awards, taking the Best Executive Car crown, so the Jag’s got a fight on its hands.

But with fresher styling and the British brand’s latest 2.0-litre Ingenium diesel, does it have the firepower to pull off the win? 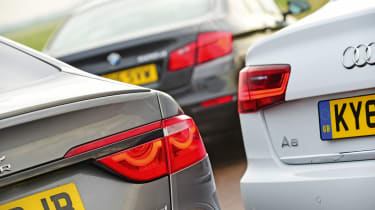 Lights are a big part of car design, as manufacturers explore new technologies. All three cars here boast smart headlamps and tail-lights so you know exactly what car you’re following in the dark. But clever LED headlights also help improve visibility and safety, so there’s a practical benefit to these design-led developments, too.

All our cars feature adjustable driving modes to tailor throttle response and steering weight for sportier driving or comfortable long-distance cruising. The systems impact on every model’s character, but the biggest differences come in the Jaguar, where Dynamic, Normal and Eco offer a broad change.

Exec saloons need to cope with modern family life. The old XF struggled when it came to rear access, but the larger doors on the new car have addressed that issue. The BMW and Audi are just as flexible – the A6’s standard powered tailgate helps a lot. 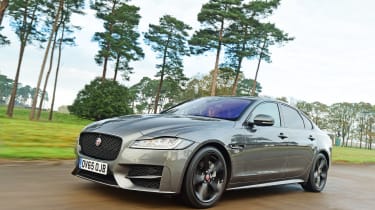 The XF beat the A6 in our V6 diesels test, and it’s conquered the BMW and Audi here in a battle of the more popular 2.0-litre engines. It’s slightly more expensive, but with all running costs considered, the Jag is a real competitor. Plus, it’s fun to drive and boasts superb agility for a car this size. The XF has really improved its usability, while modern styling completes its evolution. 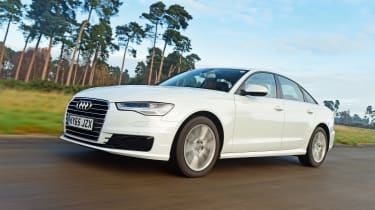 Our 2015 Best Executive Car has been toppled. The A6 is cheaper than the XF, but it can’t match it for overall appeal. Although quality is good, it feels a generation behind the Jag inside, while the A6’s chassis can’t compete in this company. It’s more efficient on paper, but savings for company car buyers will be offset at the pumps, where the XF beats it. 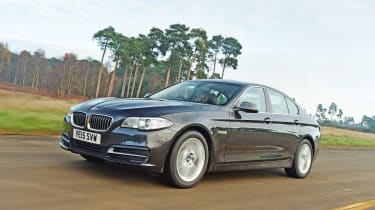 The 5 Series is still great to drive, yet while it’s just got the edge on the Jaguar for ride and handling, the XF is a more appealing package. Here, practicality, kit and efficiency are more important than performance. The A6 Ultra nearly matches the 520d for performance, and offers more kit at a cheaper price, with lower running costs. So the BMW takes the wooden spoon. 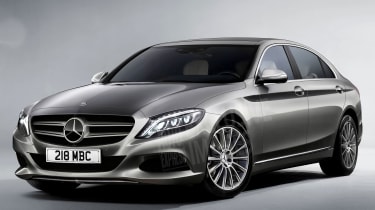 Mercedes’ new E-Class, coming next year, promises to be a big improvement, with lots of technology borrowed from the luxurious S-Class. With four-cylinder diesel power and plenty of passenger and luggage space, the E-Class could give the XF a run for its money.