Modern design, plenty of tech and extra space make the XF a great place to sit – but material quality could be better in places 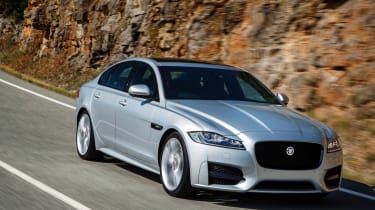 As with the exterior styling, the XF borrows many of its interior design cues from the smaller XE. As soon as you open the door and lower yourself into the plush leather seat, it’s clear Jaguar’s interiors have moved on to the next generation, although the very latest German rivals are even better still.

The eight-inch widescreen infotainment system sits in the middle of the dash, and with sharper graphics it’s a big improvement on the previous XF’s multimedia setup. Below this are two rows of buttons, which give a logical layout to the heating controls.

The original XF had a rotary gear selector that rose out of the centre console when you pressed the pulsing starter button, while the air vents rotated open at the same time. This gave the car a real sense of occasion, and the current car does the same party trick, although the centre air vents are now fixed in position and only the outer vents rotate.

At night the dashboard lights up in a cool blue glow, which gives the cabin an appealing look. However, in some areas quality is lacking, especially compared to the solid and slick cabin in the BMW 5 Series. 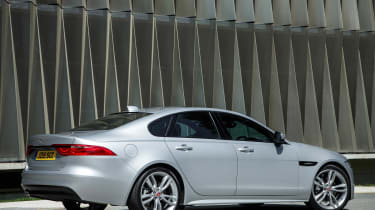 The design of the XF is still appealing, though, and the highly adjustable seats mean you can easily find a comfortable driving position. Compared to its predecessor, access to the back is much better thanks to the large rear doors, while space once you’re back there is good, too.

Most of these systems are controlled by Jaguar’s touchscreen multimedia setup, which is easy to navigate. There are big buttons at either side to take you to certain key areas – like audio, nav and climate – but although the layout is intuitive, the touchscreen sometimes takes a while to respond. 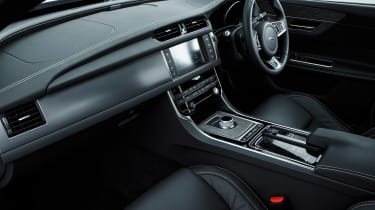 The Jaguar sound system is good, but there’s an option to upgrade it to a more powerful 825W Meridian stereo for an extra £800 (standard on Portfolio and S models). It’s easy to pair your phone using the Bluetooth, while Jaguar’s InControl apps provide another neat feature.

Jaguar’s upgraded InControl Touch Pro pack features a larger 10.2-inch central touchscreen that supports pinch and swipe gestures, while dials are also replaced by a 12.3-inch digital display. This can show driving data or the sat-nav, depending on how it’s configured.

Alongside Bluetooth, the XF offers a decent level of connectivity courtesy of InControl apps, which include contacts for your phone, maps, calendar and a music player. InControl Remote Premium (standard) also allows you to configure the climate control system from your smartphone, while InControl Secure can track your car if it’s stolen. You also have the option to use Apple CarPlay or Android Auto, too.

The standard Wi-Fi hotspot should be useful, especially if you’re travelling with family, friends or colleagues. The system creates a wireless network in the car to make it easier for passengers to work on the move or tune into the in-car entertainment.