The Picanto is great value and competent. 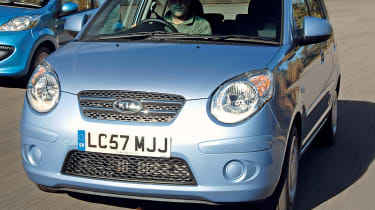 Driving The Picanto is very capable on open roads. The skinny tyres provide decent grip, and although body control could be kept in better check, it feels competent when pushed hard. It’s stable at motorway speeds too, even if wind noise can be a little intrusive. The ride is less successful, proving a little underdamped. The Kia tends to skip and bounce over potholes and uneven surfaces. There’s little feedback through the steering, but the Picanto is easy to manoeuvre into tight spaces. However, the 64bhp 1.1-litre engine hardly makes it a performance car. Acceleration is not glittering, though in-gear performance is better – even if, at high revs, the unit is short on refinement and not particularly peasant to use. The throttle is also over-sensitive. It’s quieter both at idle and on the move.

Marketplace The Picanto is Kia’s best-selling model in the UK. It was facelifted in 2007, though the changes weren’t too radical – the biggest difference was a new front end, with round headlights, softer bumpers and a redesigned grille. Every panel from the windscreen back remained the same, though the rear light clusters were also altered. The six-strong model line-up consists of a five-door bodystyle, with two engines (1.0-litre and 1.1-litre) and a choice of four trims: base, 2, Ice and 3. Rivals include the Citroen C1 (plus Peugeot and Toyota alternatives), Ford Ka, Fiat Panda, Smart Fortwo and Hyundai i10.

Owning The facelifted Picanto’s biggest changes were made inside. It features an all-black dash and door trims, a sporty steering wheel and dials backlit in orange. The driving position is good, too, with rake adjustment for the steering wheel and a height-adjustable seat. There’s also decent passenger space in the rear, while the 157-litre boot is good and cabin stowage space is useful, too. However, the cabin does feel a little narrow – rear shoulder room can feel tight. The Picanto’s trump card is its excellent value for money. Prices are low and equipment levels are high. Just bear in mind the Korean comes with only two airbags, and achieved a three-star Euro NCAP crash test rating. Economy seems decent though (the 1.1-litre averaged 44mpg in our hands) and retained values impress; they average around 46 per cent.