The Sorento has made huge steps in terms of build quality, and Kia has a good reputation for reliability

The latest Sorento has yet to feature in the Auto Express Driver Power satisfaction survey, but Kia finished 14th in the manufacturers’ chart in 2016 when the Sorento was introduced.

Still, the company has built up a good reputation for reliability, and as the previous Sorento wasn’t affected by any major recalls, it’s safe to assume this latest model will be hassle-free to own – not least because the cabin and build quality have really stepped up a notch. 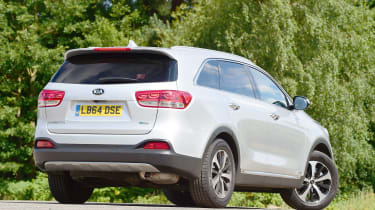 This perhaps isn’t surprising when you consider that all models come with six airbags, as well as hill-start assist control to make it easier to pull away on inclines. There’s also trailer stability control to make towing safer.

Other safety systems include a road sign detection camera that displays the speed limit and other important signs in the instrument cluster. In addition, there’s a lane departure warning system, a self-parking function and adaptive cruise control, while all versions except the entry-level KX-1 model feature self-levelling suspension to help stabilise the car.

A new 360-degree Around View function is available on higher-spec models. This uses four cameras to show the driver the view around the car, which really helps with low-speed manoeuvres – either on or off-road. 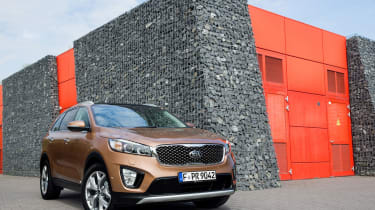 Kia’s seven-year/100,000-mile warranty is arguably the best on the market. However, if your annual mileage is particularly high and you think you might exceed that figure over the course of ownership, then it may be worth considering the Sorento’s sister car, the Hyundai Santa Fe. Although this is supplied with only five years of cover, the mileage is unlimited.

Kia offers two service packages – Care-3 and Care-3 Plus – which cover the cost of the first three or five services. Care-3 costs about £350, compared to the Skoda Kodiaq’s two-service deal at around £250. However, the Land Rover Discovery Sport’s five-year offering works out better value, at around £500. Go for Care-3 and the price of the Sorento’s first MoT is £30. Kia also offers a monthly payment plan for its service packages.