While the exterior styling is a little bit plain, the Kia Sorento has a smart and well built interior

The exterior is relatively anonymous, but the Kia Sorento has just enough visual appeal to stand out from the SUV crowd. The overall shape is an evolution of the previous generation, although it’s longer and wider than before.

At the front, the big grille features Kia’s signature tiger nose chrome surround – a design trademark that the company has been rolling out across each updated model in its range – and it’s flanked by neat headlamps with LED daytime running lights. KX-3 models get more powerful and brighter xenon headlights with cornering foglamps (you have to upgrade to GT-Line spec for fully adaptive xenon headlamps), while the front bumper is finished off with a thin, silver skid plate. 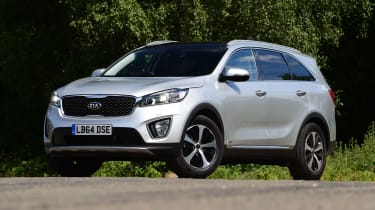 There are silver roof rails, as well as chrome trim on the sills, while at the rear is a roof spoiler and LED tail-lights. The Sorento doesn’t really hide its larger dimensions, and it looks quite imposing on the road

Inside, it’s very upmarket – much more so than you’d expect from a Kia. The infotainment screen is housed in a silver-trimmed binnacle, while a large central speedometer dominates the instrument dials. Next to this is another full colour display showing information such as the trip computer.

The Sorento is the first Kia to be passed for production by the brand’s new quality control centre in Korea, and it shows. The soft-touch dashboard, as well as the matt and gloss black plastic finishes, represent a marked improvement over the previous generation. There are still a few questionable bits of trim here and there, though, including some slightly cheap-looking materials around the gearstick, which appear prone to showing up scratches. 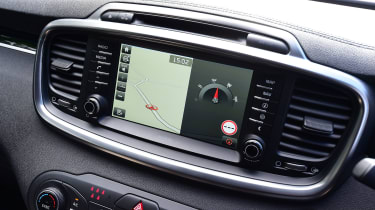 The entry-level KX-1 model is the only Sorento that doesn’t come with satellite navigation, but you do get a seven-inch touchscreen to control everything. KX-2 models and upwards feature an eight-inch touchscreen that includes sat-nav. However, all cars now feature Apple CarPlay and Android Auto, so the lack of anav in the KX-1 is no hardship if you use your phone instead. Bluetooth and a DAB radio are also included, as are USB and aux sockets to charge and connect devices.

Unlike the touch-sensitive hot keys used on the Skoda Kodiaq's touchscreen, the Kia uses proper buttons, but they’re clearly labelled and easy to use. So is the touchscreen, which offers features such as local search functions and traffic recognition for the sat-nav.