There’s loads of space inside the Sorento, plus it adds to its practical credentials by offering seven seats

The Sorento is a big SUV with seven seats, and its large cabin is dotted with useful features: it boasts levers to fold the rear seats remotely, a pair of deep storage bins and two cup-holders in the front, some useful under-floor storage, plus a USB charging point for passengers in the second row and ventilation controls for third-row passengers.

As with most models in this class, you sit high and have a good view of the road, while the optional panoramic roof is well worth considering as it floods the cabin with light and adds to the sense of space.

The current Sorento is considerably bigger than the model it replaced: at 4,780mm long and 1,890mm wide, it’s 95mm longer and 5mm wider, plus it has an 80mm longer wheelbase. However, it’s 15mm lower than before, at 1,685mm tall. The latest car is also longer than its Nissan X-Trail and Hyundai Santa Fe rivals. 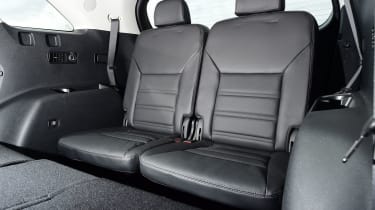 There’s no shortage of space inside the Sorento, and as the seats are mounted lower than in the previous model, there’s more headroom than before, as well as more legroom. Taller passengers sitting in the back will have plenty of space to stretch out in, while unlike in many rivals, the optional panoramic glass roof doesn’t particularly affect headroom. However, one drawback is that only the kerb-side seat folds to give access to the third row.

Accessing the rear seats is a bit tougher. The middle row of seats doesn’t fold and slide as far forward as some rivals, and the door aperture also isn’t as big. There’s plenty of room in the rear once you’re sat there, though.

The Sorento’s seven seats can be configured in a variety of ways, and with the third row in place there’s 142 litres of boot space. That doesn’t sound like much on the face of it, but they fold flat into the boot floor at the tug of a cord.

With the rearmost seats out of the way, the Sorento has a more useful 660 litres of space behind the second row – which itself can slide back and forth and has a 60:40 split. Fold this middle row of seats down via two levers in the side of the boot, and you can free up a massive 1,732 litres of space – 52 litres more than in the Hyundai Santa Fe, and easily enough for carrying most large objects. 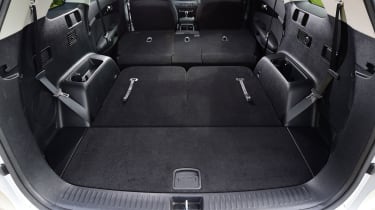 Large SUVs are prime towing vehicles, and the Kia can pull a hefty 2,500kg behind it, which is a respectable towing capacity even for a big, diesel 4x4. That being said, if you are after an automatic Sorento, the maximum towing capacity falls to 2,000kg.