Big cars usually mean big bills, but the Kia Sorento doesn’t cost too much to run considering its size

The Sorento’s fuel economy and CO2 emissions are decent for such a large car, and all models come with Kia’s fuel-saving ISG stop/start system as standard. Kia claims entry-level manual cars on 17-inch wheels are capable of 41.5mpg and 177g/km of CO2 under the latest WLTP test regime, while auto-equipped cars return a less respectable 39mpg and 191g/km emissions. While these results are poorer than they were under NEDC test conditions, it doesn't mean the Sorento will be any less economical in the real world.

As the flagship of the company’s range, the Sorento is the most expensive Kia to buy in the first place, And the top-spec GT-Line S looks especially pricey, because it's the only model to break the £40,000 barrier. That means it's a victim of the luxury car road tax surcharge, and will be over £300 more expensive to tax than the rest of the range for the first five years you pay it. 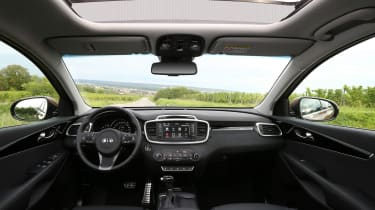 The Sorento is about mid way up the table for insurance groups, and the beauty of having only one engine with one power output is that’s about where it stays. The entry-level KX-1 model sits in insurance group 24, and the KX-2 and KX-3 models rise consecutively through groups 25 and 26. Due to a higher price and long list of standard equipment, the top-spec GT_line and GT-Line S are in groups 26 and 28. Annual premiums are likely to be cheaper for the Sorento’s Nissan X-Trail rival, as it sits in groups 19 and 20.

Large SUVs aren’t known for retaining their price well, and neither are models from budget brands, so you wouldn’t expect market-leading resale values from the Sorento. However, things are looking up: Kia has put a lot of work into improving the proportionate residual values of its cars and the Sportage crossover, which sits just beneath the Sorento in the range, has enjoyed very strong used prices. The classy interior and all-round updates mean the latest Sorento is more likely to fetch stronger prices on the second-hand market than previous versions.