The Sorento is a big, comfortable cruiser and the single engine option makes buying straightforward

Comfort and refinement are the Kia Sorento’s strong suits. Thanks to extra insulation in the engine bay and wheelarches – plus larger doors that now stretch over the sills – engine and road noise is much better insulated. That means the interior is pretty quiet and the car is a good motorway cruiser. The suspension is soft, and although it can struggle to control the Kia’s near two-tonne kerbweight, the damping allows plenty of wheel travel and takes the edge off bumps.

The drawback is that on faster roads the Kia doesn’t feel as controlled or composed as a Skoda Kodiaq or Land Rover Discovery Sport. Whereas the latter gets better the faster you drive at the expense of some low-speed ride comfort, the Sorento’s chassis feels one-dimensional and less capable. Still, big seven-seat SUVs are about comfort, so at least the Kia offers a fairly refined ride where it counts.

Kia’s Flex Steer system is fitted as standard; this adjusts the weight of the steering wheel, but the differences are marginal and the set-up doesn’t really make the Sorento any more involving to drive. Wind noise becomes a little intrusive at higher speeds, although this is mainly down to the big wing mirrors. 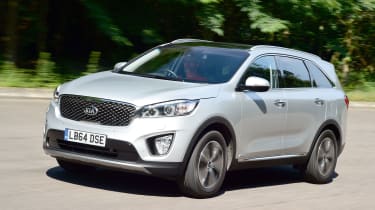 Go for a lower-spec model and you’ll get a six-speed manual gearbox, with an 8-speed auto offered as an option. Higher up in the range, the auto is standard, and the shorter gearing makes the Sorento feel faster than its 0-62mph time of 9.1 seconds suggests. But the manual provides slick shifts – and also cuts the 0-62mph time to 8.7 seconds – so we’d save the cash and opt for one of the cheaper versions.

In town, the standard parking sensors, reversing camera and light steering make the Kia easy to park for such a big car, but more advanced features including park assist and a 360-degree surround-view cameras are reserved for GT-Line models and above.

In the wet, the Kia’s sure-footed feel disappears, although with selectable driving modes, you can add extra weight to the steering in the Sport setting. Turn off the tarmac, and the Sorento’s solidity returns. It features four-wheel drive and a locking differential, meaning it’s capable when the going gets rough, and there’s plenty of traction on loose, muddy surfaces.

Choosing which Sorento to go for couldn’t be easier because there is only one engine: a 197bhp 2.2-litre CRDi diesel. It’s quite smooth unless you rev it really hard, at which point it starts to sound coarse. But drive it normally and it just buzzes away in the background. There’s a good amount of mid-range pull, too.

It isn’t hard to find big SUVs with more powerful or smoother engines. Yet you’ll pay a lot more for the privilege, and for the price, the Kia does very well indeed.

If you choose the eight-speed auto, it's not as sharp to shift as some rivals, and feels like it saps power. It slurs between gears, and although this means progress is smooth on the road, it’s no smoother or more refined than the transmissions in its rivals, plus the car loses out when it comes to performance through the gears.