Has the compact SUV had its day as a practical family carry-all? 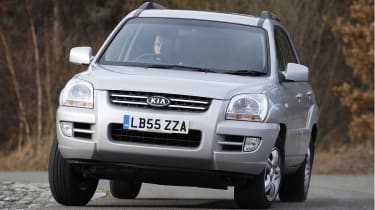 Have you ever considered an off-roader as a potential alternative to a family hatch? It’s doubtful, not least because on the surface they cater for very different buyers. But the fact that marques such as Nissan and Dodge are developing halfway house alternatives proves that there’s still demand for SUVs, as they’re seen as trendy and desirable. So why not go the whole hog and buy a genuine 4x4, rather than a pseudo one?

It’s not as if the Kia Sportage is particularly big or intimidating – at 4,350mm, it’s shorter than the Caliber and a height of 1,695mm is only 80mm taller than the Qashqai. And the styling is quite similar to the Nissan’s, too – although the Sportage does have a higher bonnet line and more space between the tyres and wheelarches. Nevertheless, it looks neat and is far from aggressive.

The Kia also has an easily accessible boot, with no load lip and a separate opening tailgate glass. There’s a large surface area, too, but that’s misleading, because the Golf’s boot is wider and deeper (the Kia’s 667-litre volume is measured to the roof, rather than the window line).

However, the Sportage does have the longest boot here once the seats are folded, and that process is simplicity itself. One handle operates each side of the 60:40 split, and the base lowers as you pull the backrest forward. What’s more, the Sportage also offers the most rear legroom.

The driver doesn’t come off particularly well in the Kia, though. The layout isn’t particularly creative and you sit high on an unsupportive seat. Nevertheless, there’s reasonable stowage and the cabin is practical and hard wearing. This is our 12 month-old, 10,000-mile long-termer and there are no hints of any rattles.

The engine doesn’t make much noise, either. The 2.0-litre common-rail diesel suffers from few vibrations and is generally refined. With only 248Nm it doesn’t offer that much torque for a 2.0-litre unit – the Caliber has 311Nm – but it picks up well from low revs, and power delivery remains strong through the range.

Although it’s smooth, the engine can’t overcome the car’s off-road nature. The Sportage is heavy – a quarter of a tonne more than the Qashqai – and the 4WD system saps power, limiting economy and performance.

Kia has tried to improve matters by fitting a six-speed gearbox, but first is so short that it’s a pain in town. At least the shift action is relatively crisp, and as it pulls only 2,400rpm at 70mph, the Sportage is a capable cruiser. Its also well insulated at speed, our noise meter registering only 66dB. Not bad considering the car’s brick-like 0.39Cd drag factor.

However, the longer travel suspension compromises the Kia’s road manners. The settings have to be stiff to ensure good body control, yet soft enough to deliver reasonable ride comfort. Ultimately it falls short in both areas. The ride isn’t as cosseting as the Golf’s and tends to jar on potholes, but the rigid bodyshell does a good job of damping out the worst bumps.

The handling is of more concern. You’d expect it to feel relatively lethargic in this company, but we weren’t prepared for there to be so much delay between turning the wheel and anything happening – it’s not very reassuring.

Vague and lazy in comparison to its hatchback rivals, it may be more capable on tracks or across fields, but it doesn’t represent great value for money for most family car buyers.

The Kia got closest to matching its 39.8mpg claimed combined figure, returning 34.9mpg. With 58 litres of diesel needed to fill the tank, it should last you more than 440 miles.

The Sportage’s 51.3 per cent residual value might surprise you. Worth £8,462 after three years, this would make the Kia the best second-hand bet.

It costs £510 for the Sportage’s first three dealer visits, which works out cheaper than the Caliber and Qashqai. Kia has 170 outlets around the UK.

The Sportage has by far the dirtiest emissions, and as a result it sits in the 27 per cent bracket. Costing higher band owners £1,782, it’s the most expensive here.