It’s a fresh approach to family motoring, but does the Qashqai work? 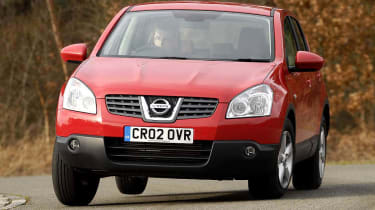 Styled in the UK at Nissan’s London design studio, the Qashqai looks modern, chunky and well proportioned, and yet has a body that’s similar in size to a conventional family hatch.

However, there’s no doubt that thanks to its height, it looks like a compact SUV. And when viewed in profile, the shoulder line and kicked-up rear windows are similar to the firm’s Murano SUV, which adds to this off-road perception.

That feeling continues once you’re behind the wheel, because the lofty seating position will certainly please fans of off-roaders. Forward visibility is excellent, and with a simple cabin to live with. There’s lots of clever storage space dotted around, while all the switchgear is within reach and operates precisely.

In the rear, there’s a decent amount of legroom, although the roofline slopes down towards the tailgate. Head space is still acceptable, but you do feel slightly hemmed in compared to the Golf. The biggest problem is that the thick C-pillars and small rear screen restrict visibility. Fortunately, Nissan includes parking sensors as standard.

The firm hasn’t done anything clever with the rear seats, though, because they fold conventionally and have a standard 60:40 split. However, the boot itself is a useful shape, and it’s the longest and widest of any car in this test.

With as much space inside as the best family hatchbacks, as well as great build quality, the Qashqai scores well. But the tall suspension, which is needed to give an SUV-style ride height, means there is a trade-off when it comes to handling. However, it’s not as noticeableas you might expect, and the Qashqai is surprisingly adept in corners.

The steering, while somewhat lacking in feel, is fluid and direct, allowing for precise turn-in. A taut body and well controlled suspension mean the Qashqai rolls slightly, but then maintains its composure.

As a result, it’s agile and reassuring in a way neither the Caliber nor Sportage is – only the Golf is as pleasant to drive. Under braking, the Qashqai is very stable, and while the VW had the shortest stopping distance from 70mph, the Nissan wasn’t far behind, and was more controlled than either of its high-riding competitors.

The Qashqai’s ride is impressive, too, because the damping is cosseting. However, over sharp bumps, particularly in corners, the Body shimmies. But this is the only time the newcomer lets you down, and on the motorway the lack of wind noise and overall refinement proves extremely impressive.

The 1.5-litre diesel helps this, because while it’s not as powerful as its rivals here, it’s noticeably quieter and delivers smooth performance. Combine this with the slick six-speed gearbox and light but well weighted pedals, and the Qashqai is a very user-friendly machine.

With a small options list, each trim level adds more goodies, and compared to the fractionally cheaper Golf Match, this mid-range Acentamodel is well equipped. Parking sensors, climate control, a CD changer and power-fold mirrors are standard on the Nissan and options on the VW. So it’s well built, generously specified and easy to drive. But does it make more sense than any of its rivals here?

The Nissan boasts the largest fuel tank here, with a capacity of 65 litres. It might only achieve 36.7mpg, compared with its claimed 52.3mpg, but the range is a healthy 525 miles.

Our experts have yet to predict the Qashqai’s residuals, and second-hand prices are hard to estimate. But it’s safe to assume they will be far better than the Dodge’s.

If the Qashqai is your company car, it will cost higher band owners £1,224 a year. With CO2 emissions that put it one group above the Golf, it’s only £68 a year more than the VW.