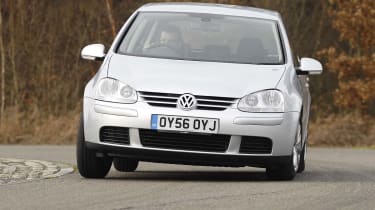 Compared to newer and bolder rivals such as the Honda Civic and Citroen C4, the Volkswagen Golf’s styling is rather conservative. But while it might lack cutting-edge looks, its simple, classless appealis arguably more desirable than the design of its wannabe-SUV rivals in this test.

It also has an air of solidity that’s confirmed by the thud of the doors closing and the tight panel gaps. In fact, there’s a clear split down themiddle of this test, and only the Nissan comes close to feeling as well built from such good quality materials as the Golf. The VW doesn’t really fall down when it comes to practicality, either – it’s only 111mm shorter than the Nissan, and with a wheelbase that’s just 52mm less, interior room is similar to the Qashqai’s.

Rear passengers benefit from decent leg and headroom. And while the Golf’s 350-litre boot is smaller than those in its crossover rivals, it’s well shaped and the seat backs fold simply to create a 1,305-litre maximum load space.

Unlike the Sportage, you don’t get a completely flat floor, but the layout of the cabin is still unmatched in this company. The dash design might be unspectacular, but it’s attractive, versatile and user-friendly, even surpassing the Qashqai in that regard.

Damped cubby lids, sliding cup-holder covers and the blue and red illuminated dials all add to the upmarket feel, while the driving position is faultless. Moreover, while it obviously lacks the Qashqai’s raised seating position, visibility in the Golf is fine, and rearward vision is better than in any rival. All the controls are nicely weighted, too, and everything is impeccably engineered.

Dynamically the Golf also stands head and shoulders above its rivals. While Nissan has done a good job with the ride and handling of the Qashqai, you simply can’t beat the laws of physics, as raising the centre of gravity will always affect the handling. As a result, the Golf is very accomplished in corners and impresses with its composed ride.

It turns in well, displays less body movement, is more adjustable and has far better steering feel. It hasn’t got any more grip than the Nissan, but it’s in a different league compared to the Kia and Dodge – turning, stopping and cruising at speed with far more confidence than either the Korean or American car can provide.

With 103bhp from its 1.9-litre TDI engine, the Golf has a very similar power output to the smaller capacity 1.5-litre 104bhp Nissan. But it has a 10Nm torque advantage at 250Nm and is lighter by 220kg, so the VW reaches 0-60mph in 11 seconds dead, seven-tenths faster than the Qashqai.

Ironically, the Dodge is fitted with the newer 2.0-litre VW engine, while the Golf makes do with the ageing 1.9-litre, so despite the Caliber’sextra weight (it carries a massive 309kg more), it’s still quicker, although not as refined. The powerplant may be rough and ready, but VW has at least ensured the Golf’s cabin is well insulated. It can’t match the Nissan for overall refinement, but with a perfectly smooth ride, it’s still a comfortable motorway cruiser.

Simple, well built and easy to drive, the VW proves that there is nothing wrong with the traditional family hatch concept. However, while it narrowly undercuts the Qashqai on price, it can’t match the Nissan’s impressive list of standard equipment.

Model tested: Volkswagen Golf 1.9 TDI MatchChart position: 2WHY: The Golf is a desirable hatch with few weak points, and will test the Nissan in every area

As with its rivals here, our 39.1mpg is still a way off the Golf’s claimed combined 53.3mpg figure. However, the TDI unit does achieve a range of 473 miles from its 55-litre tank.

Strong second-hand prices have always been a key part of the Golf’s appeal, and with a predicted residual value of £8,137 – 50.7 per cent – the Match is a solid used prospect.

With the lowest CO2 emissions in the test, the Golf is the cheapest company choice. Placed in the 18 per cent bracket, it would cost a higher band earner a total of £1,156 a year.