The unconventional Caliber is the most obvious rival to the Nissan 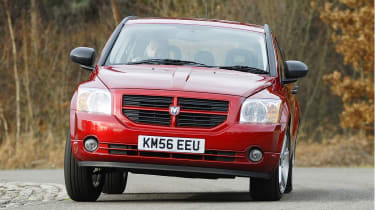 Read Dodge’s marketing material, and it’s clear that the US firm is trying to carve into the same niche as Nissan. It describes the Caliber as ‘a family hatch with Dodge attitude and SUV packaging’, and the company wants to lure buyers out of conventional hatches, such as the Golf and Ford Focus.

The Caliber is certainly different – there’s no mistaking its styling. The unusually square lines, bluff front end and prominent arches will not be to all tastes, but the SXT Sport model’s large 18-inch wheels combine with the angular panels to give the Dodge a chunky look.

Its dimensions are odd, too. It’s 56mm taller than the Golf and 80mm lower than the Qashqai, and lacks the SUV-style ride height of the latter. This is immediately apparent in the driving position, which isn’t as lofty as the Nissan’s, but crucially isn’t as comfortable as the VW’s, either.

There’s no reach adjustment on the wheel, and as a result tall drivers will find their knees brushing the dashboard. What’s more, the large, flat expanse of plastic ahead of the driver means the narrow windscreen is a long way away. And as with the Qashqai, thick C-pillars hinder rear visibility.

With the longest wheelbase, rear legroom is a match for the Nissan’s, but the high shoulder line and small glass area mean it feels more confined. With a 525-litre boot capacity, the Dodge is 115 litres ahead of the Qashqai. The load bay isn’t as long, but there’s plenty of depth below the rather flimsy parcel shelf.

However, the poor quality of cabin materials, combined with the compromised driving position, means the Dodge doesn’t have the same simple appeal of the Nissan. And matters don’t improve once you’re on the road.

All of the controls feel slack, the gearbox is vague and the clutch spongy. More worryingly, the brakes are very soft, and in our emergency stop tests, the Caliber performed badly. At 38.6 metres, it took nearly three metres longer to halt from 60mph than the Golf, and the ABS system was noisy and intrusive.

The handling is equally uninvolving. Despite having a lower centre of gravity than the Qashqai, the Caliber’s body control isn’t as good. It wallows in corners, doesn’t turn in as sharply and will understeer far sooner. Combine this poor suspension control with the large 138bhp output, and traction becomes an issue, too.

The powerful VW-sourced 2.0-litre diesel does mean the Caliber delivered the strongest performance figures of our quartet, though. On the open road, the TDI unit certainly feels punchy and urgent, but it isn’t particularly refined, and wind and road noise suggest the Dodge’s lack of insulation is a large part of the problem. And the Caliber certainly isn’t as comfortable as the Qashqai. Despite soft suspension, the ride isn’t as well damped, asit lacks composure over bumps.

However, even accepting some of its failings, there’s no denying that the Caliber offers good value for money. Its £15,430 price tag makes it much cheaper than rivals. Standard equipment includes cruise control, a CD changer and power-fold mirrors, and unlike the Nissan, Dodge includes stability control as standard.

But is the bargain price enough of an incentive to make it a worthy contender in this super-competitive market?

As is often the case with new brands such as Dodge, the Caliber’s 32.4 per cent predicted residual retention means second-hand values will be a concern.

One of Dodge’s small 88-garage dealer network will need to see your car every 9,000 miles. And with a total figure for three checks of £651, it’s costly, too.

The Dodge sits in the 22 per cent tax bracket, three bands higher than the Qashqai. It will therefore cost a higher band earner £163 a year more than the newcomer.