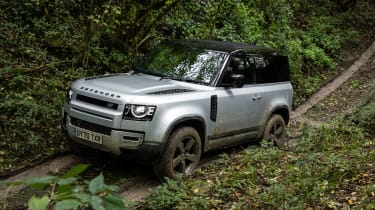 We still need to try the Defender’s simplest mechanical spec on road, but any fears that this version might lack the trail-conquering prowess of the rest of the range are unfounded. The ability to go pretty much anywhere is still here, present and correct. And, it must be said, at a usefully lower price.

We know what the top-spec Defender 90 is like to drive, with 395bhp and air suspension. But now it’s time to rate the Defender with its most basic petrol engine, with 100bhp less and conventional springs.

Called P300, this Defender has a 2.0-litre four-cylinder Ingenium engine producing 296bhp and 400Nm of torque. It gets the same eight-speed automatic gearbox as the rest of the range and can manage 0-60mph in 6.7 seconds. So it’s hardly slow.

For this test, though, we won’t explore the car’s behaviour at high speeds – because we’re taking the P300 through some of the trickiest routes at Land Rover’s Eastnor Castle off-road experience centre.

Frustratingly, our car is in 2020-spec SE trim, which is now only available to order from stock as Land Rover transitions to a revised range structure for 2021. But the most basic principles of the car are roughly the same as those of the forthcoming X-Dynamic: a posher cabin than entry spec, including heated front seats and leather upholstery, plus chunky alloy wheels (20 inches on our car) instead of ‘steelies’, but still coil-springs rather than air suspension.

Land Rover’s instructors flick the car into Terrain Response’s ‘mud and ruts’ setting and hill descent mode before we start our journey. And on the easier tracks the way the system is set up means it takes an alarming amount of revs to persuade the gearbox to shift up at all. It highlights the fact that the Ingenium engine isn’t the smoothest. 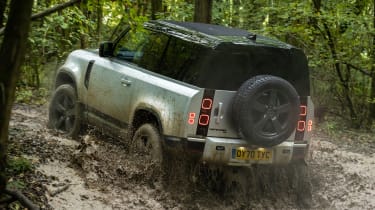 In the trees, Eastnor’s staff have opened up trails not used since the Camel Trophy selection process more than a decade ago. And heavy rain the day before our visit has turned the tracks into a quagmire, with deep mud on the ‘Nine ropes hill’ (you can guess why it’s called that) and several feet of water in the three ‘Camel dips’.

As our journey progresses, though, it becomes clear that even on all-terrain tyres and in its most basic set-up, the Defender 90 has more than enough to cope. Nervous intakes of breath turn to giggles as each progressively more difficult section is traversed with ease (and no specialist off-road experience on the part of this driver).

It’s in the Camel dips where the 90 is at its most impressive. This trio of deep, undulating pits is sufficiently serious for our instructors to get out and offer advice. But even with water sploshing over the top of the bonnet and a little bow-wave running ahead of our car, the 90 remains assured and freakishly comfortable.

The last of the dips is the deepest and for a second our Defender hangs on the climb out of it, wheels spinning as Terrain Response scrabbles to allocate power. The pause is long enough for the thought that we might be stuck to enter our heads; then a small wiggle of the steering allows the wheels to find a smidgen more purchase on the surface below, and the fronts claw us over the top and out of the water.

If the process sounds straightforward, well, it is. The excellent forward visibility gives you confidence in where you’re placing the vehicle, and in the tighter stuff, a triple-camera set-up on the infotainment screen shows what’s out in front of the bonnet, and forward-facing side views help you to point the wheels in precisely the right direction. This tech is light years away from the original Defender’s approach – yet it’s so well implemented that it only adds to the new one’s ability to fulfil the brief.