The luxurious Land Rover Discovery is a fantastic family car that just happens to be an outstanding off-roader, too 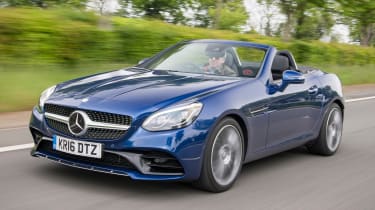 The Land Rover Discovery is a staple of the British firm's line-up. It first appeared back in 1989 as a utilitarian alternative to the Range Rover, but it has transformed over the years to become an upmarket and luxurious seven-seat family car that also happens to be excellent off-road.

The current car can trace its roots to the Land Rover Discovery 3, which arrived in 2004. While it looks pretty much identical to its predecessor, it had a thorough revamp in 2009 as the Discovery 4 in an effort to improve reliability and quality. Today, the Discovery has lost the 4 from its name, because Land Rover has seen fit to update the car every year to keep it competitive.

Rivals for the Discovery include the Volvo XC90, Toyota Land Cruiser, Audi Q7 and BMW X5, while Mercedes offers the GLE-Class and GLS-Class, which both have talents that the Discovery can emulate. Elsewhere, the Jeep Grand Cherokee and Infiniti QX70 offer something different from the norm.

Early Discovery 4 models had the 2.7-litre TDV6 from the Disco 3 (there were petrol versions offered in other countries, but not in the UK), while this was quickly replaced by a 3.0-litre SDV6 diesel. These models featured a six-speed auto gearbox, while 2012 saw the introduction of an eight-speed auto and improved efficiency for the car.

All cars featured air-suspension that delivers a comfortable ride on the road, and can be raised to improve off-road ability, or lowered to make access to the vast cabin easier.

The interior is an upmarket place to spend time, with plush leather, metal trim and high-grade plastics throughout. The back seats have plenty of space, and the square body means the rearmost seats are spacious for adults, making the Discovery a genuine alternative to a large MPV.

As the new Discovery comes online, the last versions of the old model come in special Landmark and Graphite edition models that are packed with kit and designed to send the car off in style.

The Land Rover Discovery is a giant in the full-size SUV sector. It offers a combination of the iconic Defender's go-anywhere abilities, the class and quality associated with the Range Rover and a spacious interior that rivals an MPV.

It's getting on a bit now though. The current model can trace its roots to the Discovery 3 of 2004, and despite revisions and improvements, rivals have caught and passed the British warhorse.

There's only one engine and gearbox available – a 3.0-litre diesel and an eight-speed auto – while the end of production in preparation for the release of the all-new Discovery in 2017 means the final few models were in high-spec special edition trims.

That new Discovery will trade the current Discovery's boxy looks for something more shapely and will have a look similar to the smaller Discovery Sport and the Range Rover Sport, which will mark the end of the era of big, boxy, utilitarian 4x4s for the British firm.

The Land Rover Discovery's soft chassis set-up on the standard air-suspension makes for incredible long-distance comfort, but the Disco’s weight and height mean the body rolls heavily in corners, even at moderate speeds. There's quite a bit of wind noise, too. 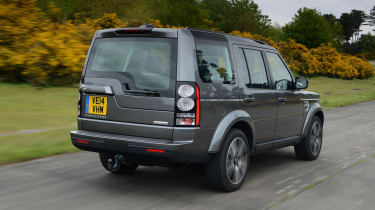 Venture off the beaten track, and the Discovery demonstrates another level of ability; it’s fantastic. Simply raise the air-suspension to off-road mode and switch the Terrain Response system to the relevant conditions, and the electronics optimise the 4WD system to suit the terrain. There are centre and rear diff locks, low-range gears and plenty of hi-tech electronics designed to keep you going. You’re likely to lose your nerve before the Discovery gets stuck.

If you do head off-tarmac, then there are some options available that are designed to help you on your way. Wade Sensing checks the depth of water you’re fording, while the surround camera system relays images from four cameras, whether you’re on or off the road.

The Land Rover Discovery has a single 3.0-litre V6 twin-turbodiesel on offer, with a healthy 252bhp on tap. This makes the Discovery good for 0-60mph in just 8.8 seconds.

The standard eight-speed auto is a big help to the car's on-road performance. Shift paddles allow you to take manual control of the box, but these seem surplus to requirements as the electronics do a good job of keeping you in the right ratio most of the time.

With a kerbweight of around 2,500kg and permanent four-wheel drive, there is only so much a diesel engine can do. Land Rover claims 36.7mpg (for the Discovery SE) – in the real world it should return around 30mpg.

It posts emissions of 203g/km, which when compared with the likes of the BMW X5 xDrive30d, is quite disappointing. If you compared the BMW in entry-level SE trim to the Discovery SE, the BMW manages much better figures – 47.9mpg and just 156g/km of CO2. Tyres will be expensive to replace and servicing will also be pricey.

For private buyers, depreciation of between 51 and 57 per centis excellent for such an expensive and aging car, although this is offset by higher servicing costs than for a Toyota Land Cruiser.

Discovery still cuts a dash on the road blending utilitarian qualities with style, but technology is behind rivals

Constant evolution has kept the Land Rover Discovery looking fresh, although it’s helped no end by the distinctive, simple lines that give it a timeless appearance.

There are lots of traditional Land Rover design features, such as the clamshell bonnet and split tailgate, that add some extra visual impact and practicality, but overall, the look is more biased towards its off-road roots, hinting at this car’s considerable go-anywhere ability.

Like the exterior design, the Discovery’s cabin is more utilitarian than the rival Volvo XC90’s, but all of the gadgets are nicely integrated nonetheless. The infotainment screen is smaller and the graphics have a lower resolution – it takes longer to respond to your inputs than the Volvo’s tablet as well, but the familiarity of the system means it’s easy to use.

Over time, there have been plenty of models to choose from. Entry-level SE cars come with air suspenion and Land Rover's clever Terrain Response system, auto lights, 19-inch alloys and rear parking sensors.

The luxury HSE version comes with plusher, Windsor leather seats which are heated in the front and in the back, a 12-way electric driver's seat and eight-way electric front passenger seat, an electrically-adjustable steering column, walnut trim, timed climate control, mood lighting, keyless entry, an electric sunroof, a parking camera and 20-inch alloys.

Landmark is the second special edition – and like most Land Rover specials, it packs extra kit for not much cash. In fact, it's based on the range-topping HSE Luxury, but is around £4,000 cheaper as a new car and comes with softer leather seats, 825W Meridian sound system, rear entertainment pack, digital TV and Windsor hide covering the top of the dashboard and armrests. There's also a haul of Landmark badges for the exterior and a colour palette of just five colours including a new, unique copper shade called Zanzibar.

For a proper, business workhorse there's also a commercial variant with five seats and van-like panels instead of the rear windows.

Overall the Discovery’s build quality still feels robust and up to anything you can throw at it, mixing refinement and sturdiness nicely.

The car feels more upmarket than the Toyota Land Cruiser and has a more modern design, while the fit and finish are first-class. There’s a premium feel to all of the switchgear and comfortable seats in all three rows.

Big car on the outside – big on the inside. Discovery is also a proper seven-seater

You get a fantastic raised seating position and a first-class cabin. The dashboard has a luxurious mix of leather, wood and soft-touch plastics, plus big chunky air vents. There's lots of room for driver and passengers while hi-tech gizmos like the dual-view centre console screen are desirable. Other options include a set of five cameras that can help you negotiate tight spaces, whether you're in the middle of nowhere or a multi-storey car park.

The two-part tailgate opens to reveal a 543-litre boot, while the lower section doubles up as a handy seat. It also creates a flat boot lip to help loading. The Discovery’s split tailgate is a nice touch, and provides somewhere to sit on family days out, but it’s also quite tall, so you’ll have to lift luggage high to load the boot up. Also, with it down it’s hard to reach in from the outside to put the back seats up. 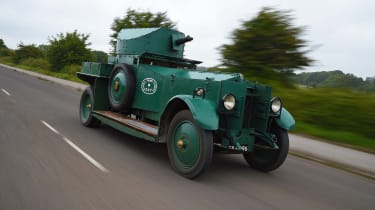 The manual seat-folding mechanism is clearly labelled and simple to use, although the rearmost seats are a bit heavy. Once up there’s lots of room, despite tight shoulder space, and two adults could easily sit in the back for a long journey.

Passenger space in all three rows is superb, with lots of headroom and storage, while the large glass area and three sunroofs give an airy feel. Getting in and out is easy, thanks to the Access suspension mode, which lowers the car by 5cm from normal driving height.

Land Rover is a perennially poor performer in our Driver Power satisfaction surveys. It ranked as the 29th brand out of 32 in 2015, while its dealer network’s performance was consistent with this, finishing 28th in the same year.

As the Discovery has been on sale for more than 10 years now, most problems should have been ironed out – the Mk4 was voted the 68th best car to live with in our Driver Power 2015 top 200. Owners praised its ride quality and practicality. However, the results also show reliability can be patchy, and while the update from Disco 3 to 4 was supposed to improve reliability, we have heard of assorted electrical issues with the 4.

As the Discovery has basically remained unchanged since the Mk3 model, the last Euro NCAP crash test was back in 2006. It received four stars overall, but bear in mind that the assessment has changed a lot since then, so a newer four star-rated car is likely to be a safer car.

However, safety kit has been upgraded to include more airbags, as well as ESP, blind spot warning and reverse traffic alert. So although the Discovery can’t match the latest Volvo XC90 for hi-tech features, it should be reassuring.

Land Rover offers a number of service packs costing from around £500 helping owners keep on top of their costs. However, Land Rove dealers aren't partiuclarly well-known for their great service according to our Driver Power survey.