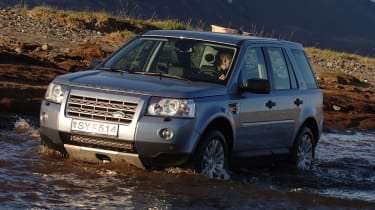 There's no doubt the Freelander is a great car. Off-road fans will be impressed by its ability on challenging terrain, while smart looks and a quality interior mean it's not too utilitarian to deter SUV buyers. The refined diesel engine offers an effortless drive with more power and better fuel economy than its predecessor, none of which is compromised by the smooth auto transmission. An impressive combination - but, at £32,330, it should be.

Looking for off-road thrills? Then Land Rover's Freelander 2 really takes some beating. However, if your daily commute is more about tarmac than trailblazing, you might like to opt for this - the all-new, diesel-powered automatic version, which aims to combine mud-plugging promise with on-road refinement and driveability.

The addition of the six-speed self-shifter to the oil-burner's options list has been a long time coming, given that the revamped Freelander was launched in December last year.

It's set to be a big part of the range, however, with 40 per cent of UK buyers expected to choose it for their cars. The good news is that the coupling of auto box and derv power has been well worth the wait, not least because the system has a CommandShift feature for manual sequential gearchanges. This adds smooth, effortless driving, as well as refined cruising, to the diesel's current list of attributes.

Delivering peak torque of 400Nm at 2,000rpm, the newcomer also has 43 per cent more power than its predecessor. It's very good to drive, too, with pleasantly weighted steering and an excellent ride.

Under hard acceleration, power delivery is smooth and seamless. There's none of the usual frustrations of jerky ratio changes, while throttle response is very sharp. What's more, the engine is quiet; with very little noise entering the cabin, comfortable seats and an elevated driving position, you can cover a considerable number of miles before you really start to feel the strain behind the wheel.

It's not cramped inside, either, and although the boot space seems modest, it's actually 38 per cent larger than the outgoing model. Capacity has risen from 546 to 755 litres with the rear seats in place.

The company's impressive Terrain Response system - which switches between traction modes - is also standard in all but the entry-level model. There's a useful Hill Descent Control system, too.

Prices start at £22,330 for the basic S trim level, which includes £1,370 for the optional automatic transmission box. However, the flagship HSE, seen here, is £32,330. The self-shifter might be the automatic choice, but at this price, the range-topper is too expensive.