British SUV gets a fuel-saving Stop-start system. We find out how it performs. 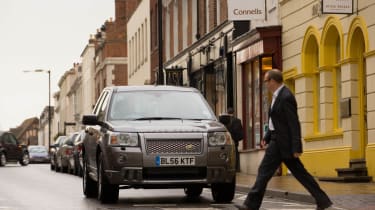 Hats off to the engineering team at Land Rover, as it has proved that the best solutions are often the simplest. By coming up with a system that requires no expensive modifications, the company has produced a car that not only offers improved fuel efficiency, but also a starting point for much greater savings in the future. All that’s needed is for you to adjust your driving style to feel the benefit.

Here at Auto Express, we generally drive cars to find out what they are like on the move. But when we were invited to try this Land Rover Freelander proto­type, we were more interested to see how it performed once it had stopped.

That’s because this test model is one of the first cars from the brand to be equipped with stop-start engine technology. The system is designed to reduce emissions and improve fuel economy, and is fitted to a standard 2006 Free­lander. The innovation will be on sale in 2008, and is the first step in a bold plan to make all Land Rovers more fuel efficient.

Similar set-ups are already avail­able from BMW, Citroen and VW, but Land Rover’s development is marked out by its simplicity. The arrangement relies almost exclusively on existing technology, and so next to no modifications are required on the car.

In fact, the only changes are made to the starter motor, and are designed to extend the life of this critical part. Engineers claim the average vehicle is fired up around 35,000 times over a decade. With stop-start technology, that could climb to 350,000 times.

So, jump in the Freelander, start it up and hit the road. Once you pass 5mph, software tells the engine that the next time the car is brought to a halt and put into neutral, it must switch itself off. And as you coast to a stop, that’s exactly what happens.

To help conserve energy, the air-con shuts down and the power-steering is disabled, while an electric water pump keeps engine temperature even. Brake vacuum pressures are also monitored to ensure the off-roader can hold itself on a slope. If performance here drops off, the engine restarts.

Land Rover says the system will remain switched off for up to five min- utes, improving economy by as much as 10 per cent. And as soon as you’re ready to go, you simply press the clutch, and the engine springs into life.

On the road, you only notice the set-up is there when you hit heavy traffic. You need to get used to dropping the car into neutral to fully benefit from the technology – but the good news is that it works. And with the powerplant shut down, the Free­lander’s cabin is eerily quiet.

As development is still at an early stage, Land Rover would be first to admit that the set-up has a long way to go before it is ready for the road. For starters, it would like the system to work faster, firing the engine from the moment the clutch is touched, rather than when it hits the floor.

Refinement is also a concern, and work is being done to improve the smoothness with which the engine stops and restarts. Yet this is only the beginning for the set-up. At the mom­ent it’s on trial with a manual gearbox, but Land Rover will develop an auto, too. In future, it could be applied to six and eight-cylinder engines, and there’s talk of a micro-hybrid system using super capacitors to store energy.

One thing is certain, though - at this full stop, Land Rover’s future starts.

Rival: Lexus RX400h At the moment, fuel-saving technology in off-roaders is still in its infancy. But Lexus is light years ahead of the rest. While the hybrid RX400h can’t match the Land Rover’s off-road credibility, it not only has a stop-start system, but electric engines as well.