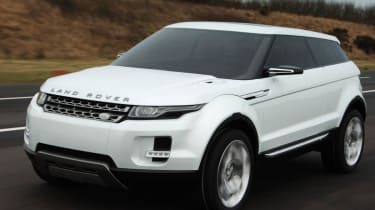 The LRX is a stunning design direction for Land Rover. Its sleek looks and luxurious cabin set new standards in the compact SUV sector. With an innovative hybrid powertrain and a chassis tuned for on-road refinement, the production version should have rivals beaten for economy, emissions and driving dynamics. Best of all, being a Land Rover, it can still handle the rough stuff. After six decades, the company remains at the top of its game.

Think Land Rover, and no doubt a chunky off-roader will spring to mind. For the past 60 years, the firm has produced some of the world’s finest mud-pluggers. From Defender to Disco­very, its 4x4s have majored on practicality and versatility, but have tended to relegate style to second place.

Not this time! The LRX was the star of last month’s Detroit Motor Show. It’s a rakish concept representing a bold new design direction for the company as it gets ready to go head-to-head with the forthcoming BMW X1.

The revolution isn’t limited to the exterior, either. Bosses at the firm claim this is set to be one of the greenest SUVs on the road. When it goes on sale in 2009, power will come from a hybrid drivetrain featuring a 2.0-litre turbodiesel unit at the front and the Electric Rear Axle Drive (ERAD) set-up at the back. At low speeds, the LRX can operate on battery power alone.

It’s sleeker and more compact than the Freelander, but there is still no mistaking the LRX for anything other than a Land Rover. The front features the marque’s signature clamshell bon­net, plus distinctive wraparound LED head­lamps and an aluminium skid plate beneath the bumper.

A sharply rising waistline, shallow side windows and bulging wheel­arches – which cover 20-inch polished alloy rims – combine to give the baby Land Rover a purposeful stance. At the rear there’s a steeply raked tailgate, while panoramic glass fills the manufacturer’s trademark ‘floating’ roof.

There are no handles to access the interior; you simply touch a silver pad and the door pops open. Once inside, you are confronted with a cabin that mixes luxury and hi-tech, and demon­strates the firm’s determination to produce a premium compact SUV. Soft brown leather covers the four individual sports seats, the dash and steering wheel. Polished aluminium is used for the centre console, which has a rising dial similar to the gear selector in Jaguar’s XF saloon. Here, it con­trols the Terrain Response system.

The dashboard is clutter-free, featuring only an LCD screen boasting 3D graphics. It’s linked to an Apple iPhone placed in a dock below the gearlever. This innovative set-up does away with the traditional key, and allows owners to personalise the car’s functions.

Everything is controlled through the phone – the seats, climate control, sat-nav and even the colour of the ambient lighting, with a choice of deep red, soothing green and cool blue. The screen acts as the ignition, too, generating a large red ‘start’ button when you want to fire the engine.

Open the tailgate, and you’ll find a chilled bottle holder in the boot floor. Press a button, and speakers swing out for impromptu tailgate parties.

Although this concept only has rudimentary running gear, it’s possible to get a feel for how the real thing will drive. Sitting low on heavily bolstered seats, it’s clear that the LRX takes Land Rover in a more sporting direction.

A deep windscreen and pillarless doors provide excellent visibility, and allow you to accurately place the car on the road. The chunky three-spoke steering wheel and gearshift paddles further reflect the company’s efforts to give its new baby exceptional agility.

However, as it wears the green oval badge, it will still be able to perform off-road. Showroom versions will use the hybrid four-wheel drive linked to the Terrain Response controller.

When the roadgoing model finally makes its public debut in 2009, expect it to feature five doors and a range of traditional petrol and diesel engines, as well as the hi-tech hybrid drivetrain. A name for the new model has yet to be announced, but Freelander Sport is thought to be a possibility.