We try out the first 4x4 in the world with stop-start technology. 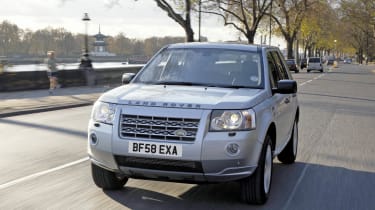 The groundwork that has been done to produce this simple stop-start system can’t be overstated. It might not sound like much of a step forward in Land Rover’s goal of reducing the emissions of its model range. However, the set-up’s development is merely the tip of the iceberg for the Solihull company. It’s clear that Land Rover’s first attempt at cutting its emissions is a resounding success – we can’t wait to see what cutting-edge technology comes next.

GOING green is set to take on a whole new meaning for Land Rover. The firm is preparing to put a stop to its vehicles’ emissions with a new generation of cars – starting with the Freelander.

It has equipped the SUV with a simple stop-start function which will be standard on all manual diesel models. The new system promises to improve the Freelander’s urban fuel economy by up to 20 per cent. Crucially, the arrangement reduces CO2 emissions to 179g/km without affecting performance.

Land Rover claims that the Freelander TD4.e is the first SUV in the world with stop-start. It uses sensors that shut the engine off when the car is stationary and the gearbox is in neutral.

The diesel fires the moment the clutch is pressed to engage first. The process is instant and, thanks to an exhaustive engineering programme, it’s extremely smooth in operation.

There’s no doubt that you need to adjust your driving style to make the most of the system.

It’s only activated by taking the car out of gear, and you need to discipline yourself to put it in neutral – particularly in the cut and thrust of busy city traffic.

However, the extra effort is worth it. When traffic snarls up and the engine is stopped, there are genuine benefits for refinement, as well as economy.

Elsewhere, it’s business as usual for the Freelander. The TD4.e offers the same fine ride and accurate steering as the current model.

Available from next March, the stop-start set-up is part of Land Rover’s e_Terrain strategy, which will bring together hybrid engines and other technologies to create cars that have less environmental impact.

And even though a hybrid Land Rover is some way off, the promise of stop-start should not be underestimated. It’s simple to use and has clear benefits for drivers who spend a lot of time in town. The Freelander is a must for anyone who doesn’t want to compromise when saving fuel.

Rival: Honda CR-V i-CTDi thanks to its super-smooth 2.2-litre diesel engine, the CR-V returns an impressive 43.5mpg on the combined cycle. It’s extremely well put together and comes with a long list of equipment as standard.