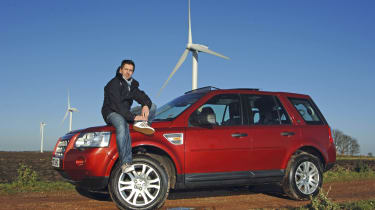 OK, I own up. My name is Pete Gibson and I drive an SUV. These days, the stigma attached to off-roaders is such you feel you have to confess your sins for running one.

Thankfully, Land Rover is now trying to make things easier. By investing in carbon-reducing programs such as wind farms in various parts off the world, it is able to offset the CO2 emissions put out by its cars over the first 45,000 miles of driving.

But no matter how green or otherwise the Freelander is, now that the time has come to hand over the keys, I’m really going to miss it. Over the past six months it has been a faultless workhorse.

The engine is superb, and unless pushed hard, the auto box changes with the minimum of fuss. What’s more, the blend of style and executive saloon levels of comfort has made it very easy to live with.

While it has predominantly been confined to motorways and urban roads, the Land Rover has not had an easy life. It went head-to-head with its rivals over all sorts of terrain and conditions in our Off-Road Special (Issue 990) – and performed very well.

What impressed Auto Express’s road test team in particular was the fact it tackled the rough stuff on the standard, factory-supplied rubber which, at that point, had covered nearly 10,000 road miles.

The alloys didn’t fare as well – both front wheels were damaged by stones on the test. But the bodywork was untouched, and the paintwork is still gleaming.

We can’t say the same for the cabin, as some water found its way into the driver’s footwell after a few runs through the mud-splash on the test. That left the interior in a state – although the optional heavy-duty mats were easy to remove and simple to clean.

During its time with us, the Freelander returned reasonable economy of just under 30mpg. So I don’t feel the need to ease my conscience with a carbon offset scheme. As with most owners, I’m happy to run the Land Rover simply because it’s such a fantastic car.