The new Lexus ES is aiming to shake up the executive saloon market but can it compete with the Audi A6, BMW 5 Series and Mercedes E-Class? 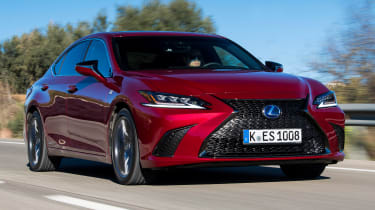 The new Lexus ES may leave a comparable BMW 5 Series with little to worry about when it comes to driver fun, but it offers a lot more for those wanting to transition into a hybrid executive car. With impressively low running costs, a luxurious cabin and superb refinement, the ES embarrasses the established competition in other, less obvious ways.

It’s hard to believe, but Lexus has been baiting the German premium brands for 30 years now. The 1989 LS luxury saloon established a template for all future Lexus models in Europe – namely high quality cars backed up by an exemplary customer care programme. Indeed, few brands have been so successful in our annual Driver Power owner satisfaction survey.

The ES, tested here in Europe for the first time, launched at the same time as the LS and has become the firm’s biggest selling (over 2.3 million, in fact) car, but the badge was never used in the UK or Europe. For 2019, though, Lexus is now offering the ES worldwide – and its appearance on these shores signals Lexus’s most serious assault on the might of the recognised German executive trio: the BMW 5 Series, Mercedes E-Class and Audi A6. 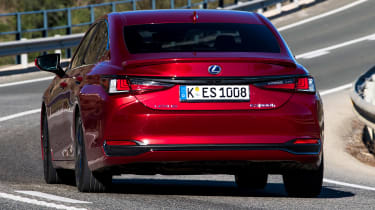 We had an early taste of the new ES in the US last summer, but this is our first chance to try the car in Europe and for the first time in F Sport trim. It arrives in the UK not armed with a selection of petrol engines like in the US, but one sole hybrid option.

Unlike the rear-wheel drive GS (which the ES replaces in the UK) the new model uses a new 2.5-litre four-cylinder petrol powering the front wheels. Combined with an electric motor, total power stands at 215bhp, putting the mid-sized Lexus exec on par with a BMW 525d or Mercedes E220d. As ever, there’s a CVT transmission, too, albeit with six fake ‘steps’ to simulate gear changes.

For £38,150 you can step up to an F Sport, with more aggressive styling and 19-inch wheels. The top-drawer Takumi costs £45,650 and boasts a Mark Levinson sound system, a 12.3-inch infotainment screen, head-up display, a 360-degree camera and LED headlights with a matrix-style anti-dazzle function. Both the standard ES and the ES F Sport can be upgraded with Premium, Tech and Safety, and Takumi packs, so you can mix and match particular features.

Even on our F Sport’s big wheels, CO2 emissions stand at an impressive 106g/km – with the entry-level ES coughing out an incredibly low 100g/km. Fuel economy on the WLTP cycle ranges from 52.9 to 59.3mpg depending on wheel size. For company car drivers that offers a smile-inducing 25 per cent BiK tax rating.

But the real question that needs answering is whether the ES can stack up against the Germans behind the wheel. The short answer is no – but it’s not that straightforward. 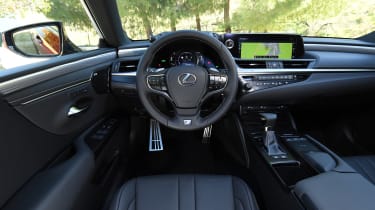 The ES gets a new type of suspension that Lexus is calling a world first. It’s slightly grandiose to call it unique, but in the executive class at least the ES’s suspension is different. In short, the Swing Valve Shock Absorber has a new valve that ensures the right level of damping is applied at the right time, improving low-speed ride and making the car corner flatter at speed. It works well, with a plush ride around town and an even smoother one on the motorway – although Spain’s smooth roads did flatter the car.

However, the F Sport gets an adaptive version of the ES’s trick suspension, which adds an unpleasant jitter even on some pretty smooth roads. It gets worse as you cycle up through the ES’s driving modes, too.

Even with the F Sport’s stiffer suspension giving better body control, the ES can’t compete with the BMW 5 Series’ sheer polish or even the Audi’s A6’s impressive blend of comfort and driver involvement. Yet the steering is well weighted, direct and gives a surprising level of feedback, and the chassis is grippy. 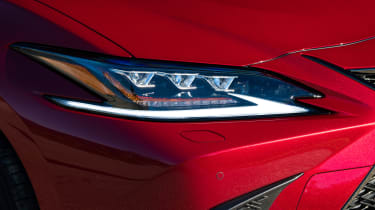 It’s not the F Sport’s suspension that’s the biggest reason for the ES failing to live up to the 5 Series though, but the hybrid powertrain. Anything other than a gentle touch on the throttle sends the revs soaring, a blare of engine noise and little gain in speed; the engine simply can’t match its diesel rivals’ huge slug of torque when it comes to brisk overtaking. That diesel versus hybrid comparison may seem unfair but even a plug-in hybrid Volvo S90 T8 or BMW 530e seem more keen under heavy load.

But drive with the mindset that the Lexus isn’t a thrilling, BMW-baiting mid-sized exec, and its more subtle qualities shine through. For outright refinement and long distance cruising, the ES embarrasses the Mercedes E-Class and Jaguar XF, shows up a Volvo S90 and even ruffles the Audi A6 – it’s deeply impressive.

The ES’s outstanding cruising ability is enhanced by a lovely interior. It’s rich with plush plastics, supple leathers and the type of tight build quality that Audi’s engineers will be paying close attention to.

If only Lexus hadn’t insisted on giving the ES such a coupe-like sloping roofline – robbing a criminal amount of headroom – it could be the finest car in the class for driver and passenger comfort.