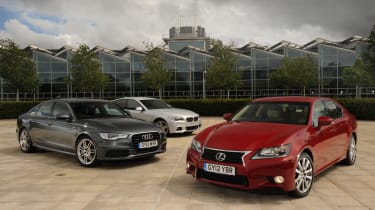 You have to be brave to go your own way in the regimented corporate world. Even though diesel power dominates company car parks up and down the land, Lexus believes a petrol-electric hybrid is a better bet for delivering a winning blend of economy and performance. The manufacturer pioneered the concept back in 2006 with the first-generation GS 450h, and today nearly every model in the Lexus range features a hybrid option.

But how will the flagship version of the all-new GS fare against our current executive car champ, the BMW 5 Series? Not to mention the new bi-turbo version of the Audi A6 3.0-litre TDI, which has the power to rival the mighty BMW 535d and comes with the excellent quattro all-wheel-drive transmission.

All three cars promise to mix scintillating performance, decent economy, business class comfort and superb refinement. But which will be the biggest hit in the boardroom?

So can Lexus finally end German domination of the executive car class? The new GS 450h is more efficient and better to drive than the car it replaces and, as you’d expect, build quality is excellent. Plus, it has the lowest emissions in this test, so is the cheapest company car.

Yet while low tax bills are a big plus point, it looks dated inside and out, and doesn’t handle or ride as well as its rivals. Fans of the previous GS 450h will find lots to like about the new car, but it hasn’t done enough to convince buyers of traditional diesel models to take the plunge. As a result, it finishes third in this test.

Picking a winner is far tougher. The BMW and Audi have stonking diesel engines that offer sensational performance and superb refinement. The A6 is sharper to drive, but the 5 Series is a bit faster. Like many decisions, this one comes down to money: cheaper tax, lower emissions, stronger residuals and pre-paid servicing ensure an extremely narrow victory for the 535d.

Blending effortless performance with relaxed refinement and peerless comfort, the superb 535d is difficult to fault. It has a first-class cabin, plenty of passenger space and a decent boot. Most crucially, it will cost a higher-band earner around £600 a year less in company car tax than the Audi. Options are pricey, though.

The new BiTDI engine gives the A6 the punch to rival the mighty 535d, while quattro traction and superb body control mean it lacks nothing dynamically. The ride is a fraction firmer than the BMW’s, but the cabin is wonderful and it has the biggest boot. However, the BMW has better residuals and is a cheaper company car option.

Lexus is committed to a hybrid future, but the new GS 450h falls short of the best diesels in the executive class. Although performance is strong, the unresolved ride and vague handling disappoint, as do the dated cabin and bland looks. Low emissions and generous kit are plus points.