Lexus' flagship V8 powered four-door saloon gets a range of updates for 2011, but how does it stack up to the competition? We get behind the wheel to find out. 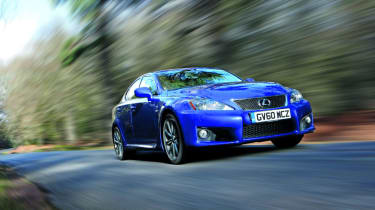 These changes aren’t going to result in the IS F becoming a more common sight on UK roads. It still has plenty of rough edges, isn’t quite as involving as a Mercedes C63 AMG or a BMW M3, and at £57,000, costs a lot more than either. However, it’s better equipped, is packed with hi-tech kit and the sheer, searing thrust offered by its 5.0-litre V8 is incredible. You’d be brave to buy an IS F, but it’s a very entertaining and genuinely different take on the performance saloon.

Meet the storming super saloon that no one has ever heard of. Compared to the ubiquitous BMW M3, the Lexus IS F has always been a niche choice. But with a 417bhp 5.0-litre V8 and an eight-speed paddleshift gearbox, it’s an intriguing alternative to the German machine.
This revised version seeks to increase its appeal with suspension tweaks aimed at improving handling. Apart from now complying with Euro 5 emissions regulations, the mighty 5.0-litre V8 remains unchanged. Peak torque of 504Nm isn’t available until 5,200rpm, but there’s lots of low-down punch, and it propels the car from 0-62mph in just 4.8 seconds. The soundtrack is wonderful, too – a burble at low revs that changes to a race-derived roar as the tachometer races to the red line.
The transmission is a bit jerky at low speeds and doesn’t provide very crisp changes, but it swaps cogs quickly when you’re pressing on and with a long eighth gear, the car is quiet on the motorway. In addition to the limited-slip differential that the IS F gained last March, engineers have revised the springs and tweaked the rear suspension geometry to improve stability.
The ride is still firm, though, and there’s no doubt that an M3 absorbs bumps better around town and at higher speeds. The IS F’s front end doesn’t feel as positive either, but there’s certainly more grip than ever and the differential allows the Lexus to put its power down cleanly.
Of course, turn the traction control off, and the IS F can go very sideways indeed, but it’s a much better balanced car than it was when launched back in 2007. Painted in vivid Ultra Blue with an aggressive flared wheelarches, bulging bonnet and stacked exhaust pipes, the IS F really turns heads.
Inside, carbon fibre-effect trim tops off the centre console, while the rev counter has race-style shift lights for when you take manual control of the gearbox. The latter only serves to remind you that it’s the engine that’s the star of the show. While the rest of the car might not be perfect, you’ll never tire of telling those who aren’t in the know about its stunning performance.
Rival: Mercedes C63 AMG
With a 450bhp 6.3-litre V8 that makes a wonderful noise, the C63 is a proper muscle car. It’s not as sophisticated as the Lexus, but has so much character and costs £53,475.
Share this on TwitterShare this on FacebookEmail