New Lexus NX is set to go on display in Beijing, and will rival the Range Rover Evoque 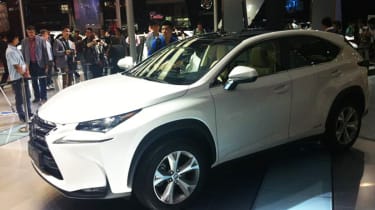 This is the Lexus NX, the brand's all-new Range Rover Evoque rival. The car has made its official debut on the Lexus stand at the 2014 Beijing Motor Show.

The edgy, angular lines of the concept have been toned down for the road car but the NX is still seriously striking. The huge ‘spindle’ grille dominate the front end, and the aggressive split headlights are inspired by the IS F Sport saloon.

Underneath, three powertrains will be available. The NX300h in out pictures is powered by a 2.5-litre four-cylinder Atkinson petrol engine, while an electric motor fitted to the rear axle adds extra performance when needed - removing the need for a mechanical link to make the four-wheel drive system work.

It’s the same layout as the larger RX350h, but features the same regenerative braking system and batteries from the newer IS300h. There is no word on the C02 emissions at this stage, but expect the NX300h to significantly undercut the cleanest eD4 version of the Evoque in terms of fuel economy - with an official figure of around 65mpg combined likely. 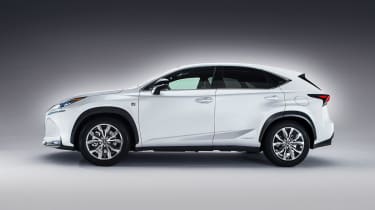 There will also be two petrol powered versions - the flagship will be the new NX200t - an all-new 2.0-litre turbo unit with around 250bhp, which looks set to roll out across the range, replacing the old 2.5-litre V6 in a number of models.

The final option is a naturally aspirated version of the new 2.0-litre engine, but even this version will have the option of either front or four-wheel drive. Instead of the battery-assisted four-wheel drive of the NX300h - both these models will use a more traditional mechanical four-wheel drive system with a locking centre differential, borrowed from the Toyota RAV4. As with all Lexus models there’ll also be an F Sport version, with larger wheels, sportier styling and a plusher cabin - which is likely to cost around £5,000 more than the standard car.

Inside, the the NX features a range of new gadgets, including a wireless charging tray for smartphones and iPads, a head-up display, panoramic cameras, G-sensor and boost meter. 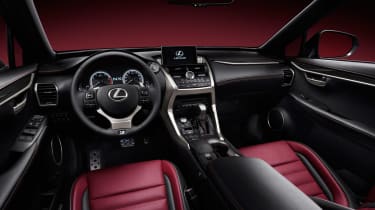 The interior is designed to be sportier and more driver-focused, so there is a thick-rimmed steering wheel, and alloy pedals, but most of the switch gear will be familiar to any owner of the GS or IS, with the same analogue clock set in the centre of the dash and ‘sliding’ climate control touch sensors next to the hi-fi.

Order books for the new NX will open this autumn, and a company source told us that as well as targeting the Evoque, the NX would be similar in size and price to an Audi Q5 and BMW X5. That makes it a bit larger than the Evoque, and also clears the way for the next-generation of RX - which is set to move up a class, and gain a seven-seat option, taking on the Mercedes M-Class and new Volvo XC90 in the process. Expect prices for the NX to start at around £30,000 for a front-wheel drive 2.0-litre, rising to around £43,000 for a fully-loaded NX200t in top F Sport trim.