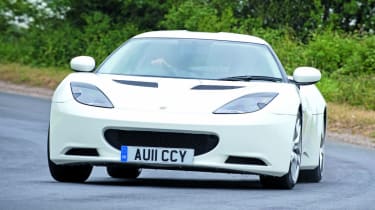 The IPS option will satisfy markets that simply must have an automatic gearbox. It is smooth during gentle driving, and gives away only 1.1mpg to the manual version in combined fuel economy. The chunky paddles are a joy to use, too. However, up the pace in auto mode and the box often becomes confused. As a result, it’s not the version we would recommend to keen drivers – and that’s most Lotus buyers.

Lotus hopes that its new automatic gearbox is what it needs to crack the lucrative American and Asian markets. Called Intelligent Precision Shift (IPS), the unit will make its debut in the Norfolk company’s grown-up sports car, the Evora.

Despite Lotus’ aim to boost overseas sales, it is offering IPS to UK buyers looking for an altogether more relaxed driving experience; the Evora IPS is as close to a genuine grand tourer as the firm makes these days.

The gearbox is a six-speed automatic torque convertor sourced from Toyota, and is the same unit as found in the Lexus RX. Lotus has reprogrammed its management software to remove the ‘slushy’ action associated with luxury automatics.

So, out go silky, slow changes, and in their place is a noticeable thump when shifting ratios. Bosses say they have done this to improve driver involvement, and retain the racy nature for which the firm’s cars are famous.

It certainly feels sporty, and with light use of the throttle in standard ‘D’ mode, upshifts are fluent. When driving gently, the box will search for the highest gear smoothly and quickly.

However, disappointingly, it’s when pushing the car harder that the IPS gets caught out. The gearbox can be switched to Sport mode via a button on the centre console, which makes it behave more aggressively – it holds gears for longer, and blips the throttle on downshifts.

The set-up uses information on the throttle and steering wheel positions to determine whether you are cornering, and is programmed not to change ratios mid-bend.

Unfortunately, at regular road speeds, the gearbox does shift in corners. It’s an irritation rather than a problem, but it’s enough to distract from a driving experience that’s otherwise among the very best.

The issue can be solved by using the paddles to change gears manually, and it helps that they have a high-quality feel – chunky and with a well weighted click. Ultimately, though, those moments of frustration leave a lingering feeling that IPS is a thorn in the Evora’s side.

While it’s clever and smooth, it’s at odds with the model’s basic nature. IPS is at its best during relaxed driving – but the Evora thrives when being worked hard.