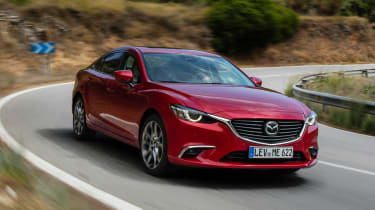 The Mazda 6 isn’t quite the best all-rounder in the family saloon class, but it’s still a strong buy that looks reasonable value. Most of the 6’s appeal still lies in its great styling and driver appeal, but refinement and comfort levels have edged slightly nearer to newer rivals in this round of updates. The lower-powered 2.2-litre diesel is our pick, although we’d be tempted to opt for the Tourer as it keeps the sharp looks and boosts practicality.

The Mazda 6 might look and feel relatively fresh, but it's actually over three years old now. Time can take its toll quickly in the competitive large saloon and estate segment, with newer challengers like the Ford Mondeo, VW Passat and Skoda Superb moving things on since the Mazda’s launch. To try and stay ahead of the curve, the Japanese brand has pushed out another update for the 6 range.

We drove the first facelift of the Mazda 6 last year, but this 2017 model year update focuses on refining the interior, tech and chassis rather than tweaking the exterior: subtly different wing mirrors are the only alterations you’ll find. No matter: to our eyes the 6 remains one of the sharpest-looking offerings in the class whether it’s in saloon or estate form.

There are some subtle tweaks to the cabin, however - and when we say subtle, we mean it. The design of the steering wheel has been altered, and both the 4.6-inch colour dial display and head-up display gain smarter graphics, but other than an extra smattering of chrome around the gearlever it’s business as usual. The biggest updates are hidden away – the 6 now receives a forward facing camera to offer a more advanced autonomous emergency braking system, while traffic sign recognition is thrown in. Top models now get a heated steering wheel, memory seats and power-folding mirrors, too.

It remains a fine place to spend time, with a comfortable driving position and intuitive switchgear (we particularly like the rotary dial for the infotainment system), and while material quality is still a notch behind the VW Passat, the Mazda has a more attractive dash design. It’s a shame Apple CarPlay smartphone connectivity isn’t available, however. Space isn’t bad, although the saloon shape limits headroom compared to the Tourer. Neither lead the class in terms of bootspace, either. 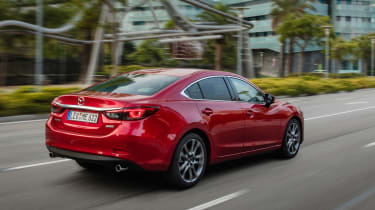 Of more importance is what’s gone on under the skin; Mazda has introduced an innovative new electronic chassis system across the range. Called G-Vectoring Control (or GVC) it subtly adjusts engine torque according to steering input to allow the car’s weight to shift more fluidly in the bends. In theory, it’s supposed to make the car more stable and comfortable in regular driving, as opposed to improving on-limit handling.

Mazda showed us all manner of graphs and videos to prove its effect, but on our test drive we struggled to notice the system’s impact. Still, you and your passengers may notice the benefits on longer runs, and it doesn’t affect the 6’s status as the driver’s choice in the segment unduly. The steering is still direct and nicely weighted (more so with the smaller wheels on SE-L models), body control is tidy and the gearshift is pleasing to operate. Ride comfort is largely good, although the 6 can get upset by large expansion joints and feels a touch firmer around town than rivals. 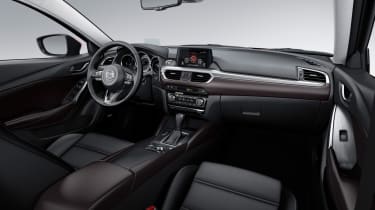 We tried the best-selling 2.2-litre diesel with 148bhp and a six-speed manual gearbox. The suspension is unchanged; instead, Mazda has worked on refinement, introducing better door seals and sound insulation, plus laminated front side glass. Mazda has added a neat counter-weight to the diesel engine’s pistons which it says makes the 6 both more refined and more responsive. It seems to have had the desired effect, as it’s marginally less grumbly than before and doesn’t sound as vocal higher up the rev range. It also remains a punchy and flexible unit, feeling much more urgent that the similarly-powered unit in a Mondeo, while efficiency figures are competitive. Road and wind noise are kept at bay more effectively, but the Passat has the edge in this regard.

Prices remain unchanged from the current car, though, which is a bonus. Our fully-loaded Sport Nav model might look a bit steep at just under £28k, but given it’s easy to spec a Mondeo or Passat over £30k nowadays we’d say it’s competitive. Even so, the best value is found with the SE-L Nav model, which makes do with smaller wheels but keeps most of the kit you’ll need.