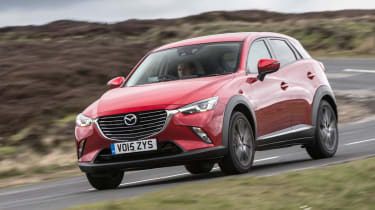 Stylish, economical and surprisingly engaging to drive, the CX-3 ticks the boxes other crossovers can’t. Kit is generous throughout the range and the quality cabin and neat design flourishes make it a comfortable place to spend time. There’s no hiding from its inflated cost, but there’s enough attention to detail and quality in the CX-3 to make it worth its premium price tag.

Small crossovers might be a relatively new phenomenon, but their popularity means the market is already one of the most fiercely competitive. The explosion of new arrivals shows no sign of stopping and this is our first opportunity to test the all-new Mazda CX-3 in the UK.

Mazda may be slightly late to the party with the CX-3 but it’s ensuring buyers won’t be short on choice. An 18-strong model line-up, made up of petrol or diesel powertrains, front-wheel drive and all-wheel drive as well as the option of manual or automatic transmissions are available on the small SUV. It’s a level of variety few rivals can match. 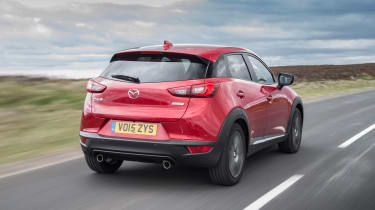 Mazda claims it’s pitching the CX-3 up against competitors that are still yet to make it to market. Audi’s forthcoming Q1 and VW’s yet to be named baby SUV is where Mazda is confident the CX-3 can compete. And it’s certainly reflected in its price tag.

Kicking off from £17,595 and rising to a bank-busting £24,695, there’s no questioning the CX-3’s premium positioning against current alternatives. For reference, rivals including the Juke and Captur start from almost £4,000 and £3,500 less respectively. 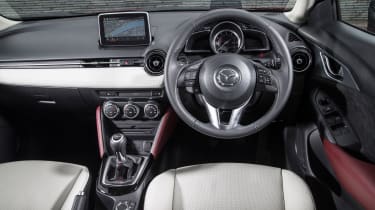 What the extra money does buy, however, is arguably one of the most handsome crossovers on the market. The CX-3 uses the latest interpretation of Mazda’s KODO design language, also featured on the facelifted CX-5 and new MX-5 roadster. Where image and style can often be the deciding factor for buyers in this sector, the short overhangs, squat stance and sleek lines of the CX-3 look fantastic.

Beneath the muscular body, the CX-3 is actually based on the Mazda 2 supermini. Both share an identical wheelbase, but the CX-3 is 215mm longer, 70mm wider and fractionally taller. Although incremental gains, they’re vital additional millimeters for squeezing in more luggage and taller passengers. Boot space of 350 litres is on par with similar sized rivals, but go for a top spec Sport Nav model like our test car and a bulky but brilliant Bose surround sound system eats into space, reducing capacity to 287 litres. 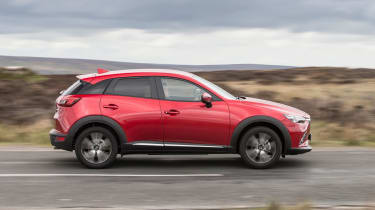 The biggest benefit of the CX-3 being based on the smaller supermini is that the crossover retains the eager and light-footed dynamics of the Mazda 2. Even fitted with the only diesel option in the range, the 105bhp 1.5-litre SkyActiv-D engine, the CX-3 is nimble but stable. It’s down to the crossover’s low centre of gravity and responsive steering, which is precise and well weighted.

Even during faster changes in direction, the stiffer springs and dampers allow the CX-3 to manage weight transfer well, remaining balanced and poised where a Juke or Captur would begin to wallow. The trade off is a slightly firm low-speed ride, but it’s never uncomfortable - only becoming jolting when faced with larger potholes. The crisp and weighty six-speed manual gearbox also gives the CX-3 a sportier character than any other crossover. 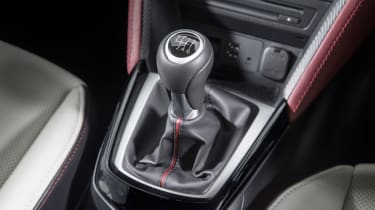 The 1.5-litre diesel engine has also been carried over from the Mazda 2, but a revised turbocharger boosts torque from 250Nm to 270Nm. The engine doesn’t hit you with the heavy slug of torque you get from a traditional turbodiesel, instead the power is fed more progressively, so it can feel a little sluggish to pick up from low revs. The further you extend the engine the more coarse it becomes, but settling into a cruise means it becomes a lot more smooth and refined.

One thing you won’t take issue with is the economy. Mazda claims 70.6mpg and 105g/km of CO2 for a front-wheel drive diesel model equipped with a manual gearbox. That’s almost best-in-class, only outdone by the 99g/km Renault Captur. 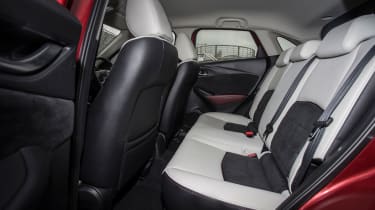 But Mazda has also gone to great lengths to ensure the CX-3 is as safe as possible. Top spec Sport Nav models, come with a head-up display, reversing camera, smart city brake and lane departure warning. It’s levels of kit you’d expect to find in the class above.

The sharp exterior design is also reflected in the cabin. Mazda has once again looked to the 2 supermini for inspiration, with a clean and clutter free design. The seven-inch colour display is operated via a separate control panel on the centre console, while soft touch materials and neat flourishes such as brushed aluminium inserts and contrasting stitching add an extra layer of quality. 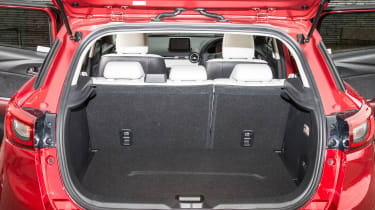 It’s not one of the most spacious crossovers – look to the Ford EcoSport and Vauxhall Mokka for that – but there’s sufficient head and knee room for adults in the rear. You may get some complaints trying to squeeze three abreast, but it’s a common grievance with most supermini-based crossovers – cars that are designed to pack so many family-friendly attributes into such a compact footprint.