British tuners BBR have introduced a stage one turbo kit for the Mazda MX-5, boosting power by 87bhp, but is it worth the near £6k extra? 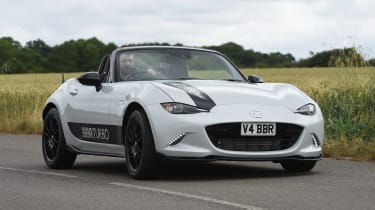 For buyers looking for something more engaging than the standard MX-5, but not quite as extreme as a Lotus or Caterham, the BBR turbo kit is a superb choice. However, we still love the standard MX-5’s more accessible sense of fun - both in terms of its price and its forgiving dynamics.

The Mazda MX-5 is one of our favourite sports cars - it’s a handsome, characterful and fun-to-drive little car that feels perfectly suited to narrow, winding British roads.

We love the naturally aspirated engines under the bonnet too, which remind us how responsive and engaging non-turbo performance cars are. However, an MX-5 is priced around the same as a hot hatchback, but it has nowhere near the performance cars such as the Ford Focus RS provide.

That’s where British tuner BBR has stepped in with its new turbo upgrade for the Mazda sports car. The Brackley-based firm has been tuning, and turbocharging, MX-5s since the 1980s, and is one of the most well-respected tuners in the country, so owners of the latest Mazda roadster are already flocking to them to upgrade their cars. 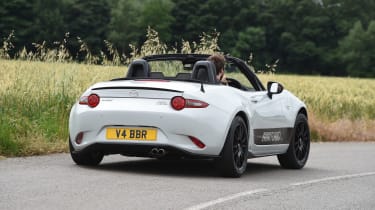 The stage one turbo kit costs £4,995 plus VAT (so the total for the conversion is £5,994). For your money you get a bespoke twin-scroll turbo that BBR has been developing since 2014, plus a host of other engine upgrades including a new exhaust manifold, an ECU upgrade and a high-flow induction kit.

All that boosts power by 87bhp and 113Nm of torque, enough to reduce the 0-60mph time to around five seconds. The upgrades are also fully reversible and come with a 12-month warranty (extendable to 36 months), while retaining all the latest MX-5’s safety and convenience features.

The kit is even available on the excellent RF folding-hardtop model. Our test car was based on a no-longer available Sport Recaro MX-5, but you can have the conversion done on any 2.0-litre car. Our car also featured OZ alloy wheels and stickier tyres, but it’s possible to have your car look almost completely standard after the work is carried out. 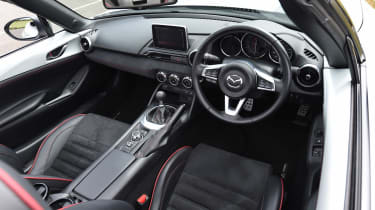 So the BBR MX-5 turbo looks good on paper, but getting it on the road reveals how the tuner has expertly tweaked the car - it retains all of the standard MX-5’s best characteristics for road use, but adds an exhilarating dose of extra power to the mix.

The extra torque from lower down in the rev range works as expected, so the car is more flexible and useable in normal driving - but we love the fact that BBR has stayed away from the boosty power delivery many modern factory-built turbo cars feature.

The power builds naturally to a peak even higher than the one in the normal engine, with maximum power coming in at 7,150rpm. Not only is it punchier at low revs, the BBR is satisfying and exciting to rev to the redline - and it sounds great while doing so courtesy of the new exhaust.

Of course, with all that power and not much weight it has a power-to-weight ratio of 233bhp per tonne - significantly more than an entry-level Lotus Elise, which has a ratio of 168bhp per tonne and costs a little more than a converted top-spec MX-5.

On the road that means the car feels as fast as you’d ever want it to be - and it adds a raw edge when you’re driving quickly. Similar to a dedicated sports car like a Lotus or Caterham, the BBR MX-5 jostles for grip, but you can feel it shifting around naturally underneath you - so it’s satisfying to keep control of rather than unnerving.

The short gearing and world-beating manual gear change remain as well, adding to that sense of satisfaction when driving hard. Our test car was also fitted with uprated suspension and brakes, all available through BBR, which make the car a little more uncomfortable but far more capable through the bends.

The front-end turns in sharply, and the extra power means you can adjust your line more easily if you want to - but it doesn’t feel so powerful that you can’t enjoy it on the road. The British tuner has held back for this stage one kit to the point that it feels brilliantly set-up for our roads and speed limits.

BBR’s upgraded MX-5 retains the more relaxed side of the car really well, too. A heavy clutch is the only clue to what you’re driving if you’re around town, as the interior is unchanged and there’s sat-nav, DAB radio, comfy seats and cruise control. Plus, the new exhaust is only a little louder than the normal one when you’re on the motorway.