A cold, wet and windy afternoon isn’t ideal to highlight the true appeal of Merc’s new AMG C 63 S Cabrio – but the C 63’s brutish, muscle car charm shines through regardless. It’s a tricky car to drive on damp roads, and demands full attention at all times, but the ability to drop the roof in just 20 seconds to open an unrestricted channel to that raw V8 bellow is hard to resist.

With all the recent wet weather, you’d be forgiven for thinking that now is not the ideal time of year to be testing a 503bhp, rear-wheel-drive convertible. And to all intents and purposes, you’d be absolutely right.

But here we are, with the keys to Mercedes-AMG’s latest four-seat C 63 Cabriolet – in esteemed S guise. It’s the same engine we know and love from the rest of the AMG C-Class range, but it’s the first time we’ve tried as a drop-top here in the UK.

It goes without saying that in transition from Coupe to Cabriolet that twin-turbo V8 has lost none of its charm or character. It’s as brutish as ever, and feels muscular enough to challenge cars costing twice as much in a straight line drag race. With the canvas roof lowered and the sports exhaust engaged, it sounds like thunder. 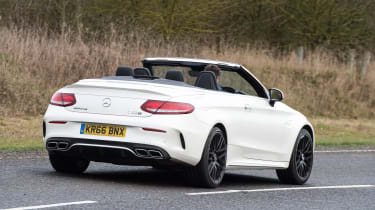 Take control of the steering wheel mounted paddles and – just like in the Coupe, saloon and Estate – throttle response is instant. On dry roads, it allows you to get on the power early, resulting in frankly astonishing slingshots from tighter bends. In damp conditions though, the C 63 S Cabriolet is nothing short of unruly.

Allegedly, the 0-62mph sprint takes just two tenths of a second longer (4.1s) than in the Coupe. But pulling away from junctions quickly becomes an arduous and hesitant affair. Anything less than chip-free tarmac results in uncontrollable wheelspin – even with the traction control systems switched on. Floor the throttle with too much haste in as high as fourth gear and you’ll feel the AMG’s tail wag, leaving you to lift off or fight the steering to maintain direction. The wide-section rear tyres do their best to preserve traction, but they are easily overwhelmed in the wet – making the C 63 S a tricky car to drive fast.

Let’s not misinterpret these quirky character traits as failings, though. On the right road, in the right conditions, the C 63 S is an absolute riot. The extra 125kg that Merc has added to strengthen the Cabrio’s chassis is barely detectable, while the steering offers pin-point accuracy and plenty of feel. There is the occasional creak from the chassis when you lean on it through sharper corners, but it’s certainly no worse than in a BMW M4 Convertible.

The brakes are excellent, too. Resisting fade well, you trust them entirely to bring you to a halt time after time. Useful indeed, as that quad-exit sports exhaust means you’ll find yourself with the loud pedal pressed firmly to the metal at every opportunity. 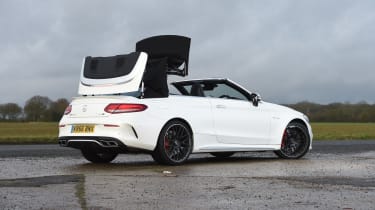 All cars feature Merc’s AMG Ride Control sports suspension and adaptive dampers – though rough roads can upset the Cabrio where the Coupe seemed to remain unflustered. It flows well on twisting tarmac though, and the ride is nicely compliant at higher speeds. There are a variety of drive modes from Comfort to Sport+ – including a useful Individual setting, too.

Of course, with the roof up, the Cabrio isn’t as quiet as its fixed-roof sibling, but that’s not what this car is about. You’ll never tire of the fact you can lower the fabric roof in 20 seconds to be even closer to that deafening bark – while on a bright and sunny day with the automatic wind deflector in place, it’s actually remarkably refined. 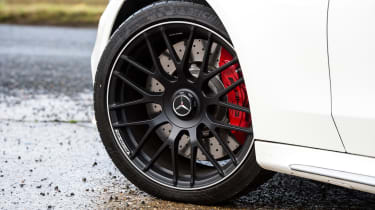 The interior is lifted almost unchanged from the Coupe, and sets a high benchmark in a fiercely competitive class. It’ll find tough competition from the yet-to-be-revealed Audi RS 5, but by current standards it’s quite simply one of the best in the business. The standard of the materials and the finish is second to none, while the easy to use scroll wheel and touchpad are only slightly less intuitive than BMW’s brilliant iDrive system.

Standard kit is generous, but so it should be for almost £73,000. Our C 63 S came fitted with Merc’s lavish Premium package, which includes more exclusive materials, an upgraded Burmester stereo and LED lights, but all cars feature an 8.4-inch screen with HD navigation, ARTICO leather and that addictive AMG sports exhaust. The base car’s 19-inch wheels were replaced by 20-inch rims on our test car.